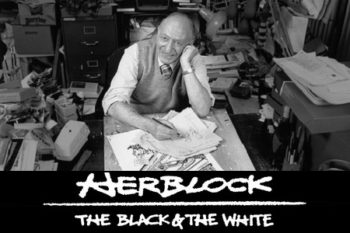 Herbert L. Block looked to Ted Koppel like a “Vermont pharmacist” – not “the most feared editorial cartoonist in the country.” And to Bob Woodward and Carl Bernstein, Block was ahead of everyone on Watergate just six days after the break-in: “We had thought it was probably a CIA operation… and did not think it was going to go to the White House. But Herb knew!” Block started cartooning in his Chicago teens and went on to win four Pulitzer Prizes and the Presidential Medal of Freedom during 55 years at the Washington Post. He challenged the high and the mighty without fear or favor; Senator Joe McCarthy and Richard Nixon, famously, felt the sting of Herb’s pen. In Block’s words, it was his job to remind our public servants “they are, after all, public servants.” Director Michael Stevens and Producer George Stevens, Jr. draw on their knowledge of the Capitol and the best minds in journalism to tell the Herbert Block tale. Jules Feiffer, Gwen Ifill, Bob Schieffer, Tom Friedman, Tom Brokaw and David Brooks offer insights on how one man with an artist’s soul and a child’s heart utilized his pen like a stiletto to express his belief in justice, human rights and always “watching out for the little guy” – while Jon Stewart and Lewis Black describe how Block influences 21st-century satire. The arc of Block’s career takes us from World War II, to the Red Scare, our struggle for Civil Rights, Vietnam, Watergate and the conflicted media world of today – concluding with an unexpected end to the journey of the cartoonist-journalist known simply to millions as “Herblock.”