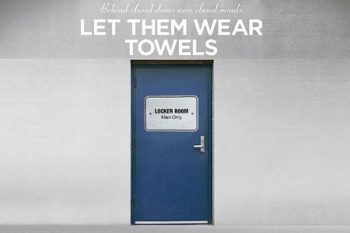 Lisa Olson was just trying to do her job as a reporter for the Boston Herald in 1990 when a group of New England Patriot players sexually harassed her in their locker room by exposing their genitals and making lewd and vulgar comments. Even though a subsequent NFL investigation concluded that Olson had been “degraded and humiliated,” the 25-year-old continued to be tormented by Patriot fans – so much so that she temporarily moved to Australia to resume her career. Why has equal access for women reporters remained such a hot-button issue? That question is asked in Let Them Wear Towels, a history and examination of females working in the man’s world of the locker room. Through interviews with such pioneer women as Ludtke, Claire Smith, Lesley Visser and Christine Brennan, you’ll hear stories of raw behavior and humorous retaliation, angry lawsuits and remarkable resolve. The incident touched off a national debate about the presence of female journalists in the male sanctum of the clubhouse. That debate should have been settled 12 years earlier, when Melissa Ludtke of Sports Illustrated successfully challenged Major League Baseball after she was kept out of the New York Yankees’ locker room.