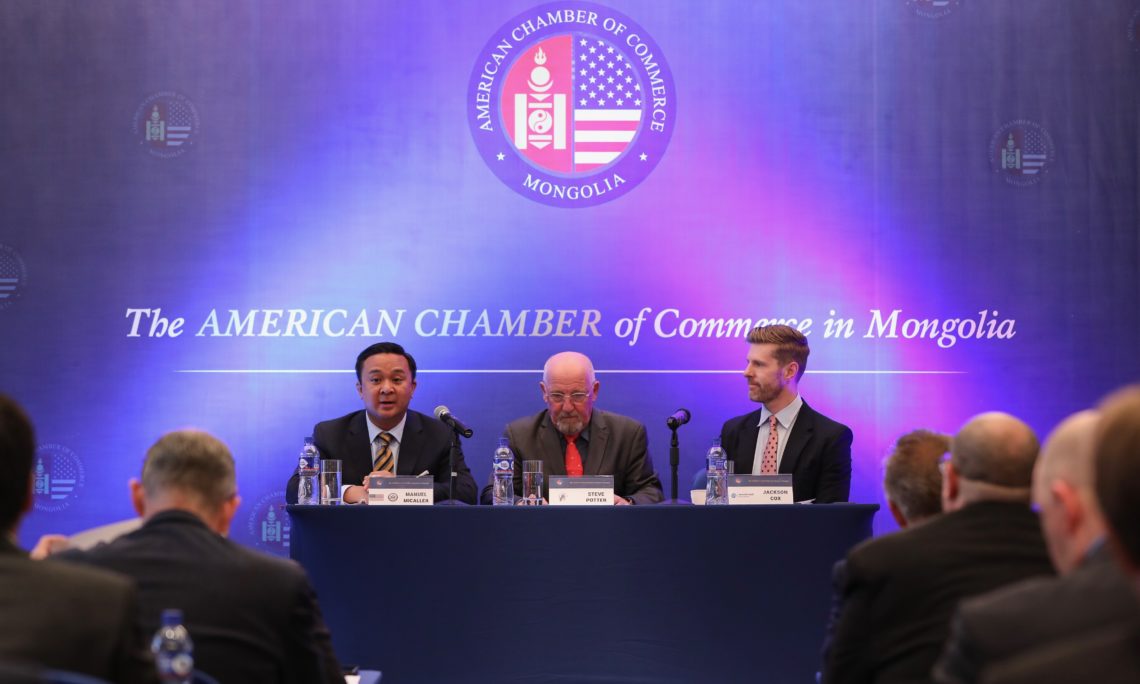 Good morning, American business community.  I’d like to take this opportunity to recognize and thank Steve Potter for his service to Amcham, U.S. businesses, and overall contributions to our commercial diplomacy initiatives.  Thank you Steve.

I’d also like to welcome Oybek as the new Chair – and, as someone who has spent much of his career in Central Asia, I very much look forward to trying the legendary plovyou make that everyone raves about.

Today I will speak about the Administration’s Indo-Pacific strategy.  I’ll try to break it down into two areas – the overall strategy, and what it means for Mongolia.

The question I hear a lot is – what does this “Indo Pacific Strategy” mean?  The topline message is that it is intended to create a peaceful and secure region where all nations are sovereign.  We want to build a framework for economic growth that is private sector-led, and promote a governance emphasis that encourages private-sector growth by making economies open, transparent, and rules-based.

President Trump identified the Indo-Pacific as among the United States’ most important priorities in his speech at the APEC CEO Summit in November 2017.  Our vision for the region is clear – to support a constellation of nations that are sovereign, strong, and satellites to none.

This vision is built on principles that are widely shared throughout the region: ensuring the freedom of the seas and skies; insulating sovereign nations from external coercion; promoting market-based economics, open investment environments, and fair and reciprocal trade; and supporting good governance and respect for individual rights.  These values and policies have helped this region grow and thrive.

Advancing a free and open Indo-Pacific is a whole-of-government effort built on a clear record: Where the United States goes, we seek partnership, not domination.

All U.S. initiatives in the Indo-Pacific are designed to be open platforms for new and expanded collaboration with allies and partners.

Our strategy is inclusive.  As Secretary Pompeo has said, “Our Indo-Pacific vision excludes no nation.  We seek to work with anyone to promote a free and open Indo-Pacific, so long as that cooperation adheres to the highest standards that our citizens demand.”

It’s important to note that the U.S. Indo-Pacific strategy is not targeted at China or any other country.  Rather, it is rooted in longstanding friendships and the values we share with partners and communities in the region, such as our commitment to being Mongolia’s third neighbor.  We seek a constructive, results-oriented relationship with China, wherever possible. We have no intention of making countries “choose” between the United States and China.

It’s also important to note that we’re not trying to “outspend” China.  Instead, U.S. money creates the conditions to allow the private-sector to invest.  That is the largest source of funding.  No government spending can ever match it.  We do not care where money comes from.  What is important is how it is spent.

No government has enough money to meet the region’s economic and development needs. Countries that rely on state-dominated funding for development will not only come up short quantitatively, but also qualitatively by crowding out the high-quality private-sector investment their economies need most.

The U.S. government wants to foster private sector-led growth and help build environments that allow American firms to succeed so that both the United States and the region can prosper.  This is why the American business community is a necessary component of the economic pillar of the Indo Pacific Strategy.

We believe that private sector-led economic growth is the healthiest model:  market-driven, transparent, and financially sustainable.  This is a message that we hear constantly from you at Amcham, and we ask senior-level officials from Washington to deliver that same message when meeting with their Mongolian interlocutors.

The United States is committed to expanding private sector participation as an alternative to state-dominated financing that impinges on national sovereignty and local autonomy, saddles economies with debilitating debt, and encourages corrupt practices.

Moreover, the United States will establish a new International Development Finance Corporation (DFC) created by the BUILD Act, which the President signed in October. This historic development will double U.S. capacity to mobilize private sector investment and will fuel more growth opportunities in the Indo-Pacific.

I could go on, and there are many resources online that provide further clarity.  But I want to talk now about what the Indo Pacific Strategy means for Mongolia.

When I read the Indo Pacific Strategy for the first time, I came to understand that it is perfectly aligned with what we are already doing here in Mongolia.  A strategy intended to promote shared values, a rules-based international order, and respect for the sovereignty of all nations (regardless of size) –that pretty well sums up our top shared priorities here in Mongolia.

Our Millennium Challenge Corporation Second Compact with Mongolia is a specific example of backing up these commitments with real action.  This $350 million grant funding project is not an assistance project.  It was initiated by the Government of Mongolia and required that Mongolia in fact qualify for it.  This meant hitting a series of quantifiable metrics regarding corruption and transparency, among others.

The MCC compact will increase the available supply of water through infrastructure for development of new wellfields and capacity building.  The compact’s Water Supply Project will support the construction of new groundwater wells and a state-of-the-art plant for purifying drinking water, the construction of a new plant for recycling and reusing wastewater, and the development and implementation of policy, legal, regulatory and institutional reforms that enhance the long-term sustainability of Ulaanbaatar’s water supply.

These investments will increase the supply of water to Ulaanbaatar by more than 80 percent, putting the country on a better footing to sustain its future economic growth.

It is also the largest project of its kind announced this year in the Indo-Pacific region, one done in close partnership with the government of Mongolia.  It can be popular to say that Mongolia doesn’t get enough attention, but I think this project shows just how central Mongolia is to our Indo-Pacific Strategy.

Mongolia’s importance to the Indo-Pacific Strategy does not stop there.  Since 1991, the American people have provided more than $600 million in non-defense assistance to the Mongolian people.

The United States Embassy has long prioritized our economic engagement with Mongolia out of a recognition that the economic and fiscal situation here has an impact on the everyday lives of the citizens of our countries and on all of our shared goals.

We were proud to be among the 80+ countries to support Mongolia’s IMF-led assistance package that has given Mongolia time and space to improve its economy.

We have increased the assistance provided by the U.S. Department of the Treasury to now include intermittent advisors assisting the Bank of Mongolia on anti-money laundering efforts, the Development Bank of Mongolia on efforts to improve accountability, transparency, and asset management, and the Ministry of Finance Treasury Department on efforts to improve cash management and revenue forecasting.

We are expanding our law enforcement engagements to improve Mongolia’s capacity to protect its borders from physical security and financial threats, while promoting legitimate travel and trade.  I was just at the border with China this week, and I think there is even more we can potentially do to help in this area.

Furthermore, under a joint 2018 State Department/U.S. Department of theTreasury initiative, we led efforts to create a Citizens’ Budget, which will harness the power of transparency to increase Mongolians’ ability to demand greater accountability from parliament in the budgetary process.

In closing, economic growth along a model that emphasizes shared values, a rules-based international order, and respect for the sovereignty of all nations regardless of size is a core pillar of the Indo-Pacific Strategy.  Our shared values with Mongolia make the country a vital partner for our foreign policy.

To get there, we need the private sector, and we need the values that American businesses promote through transparency, commitment to fight corruption, and corporate social responsibility programs.  Amcham and the business community are the keys to that, and I look forward to working with you and our partners in Mongolia to advance our shared values.