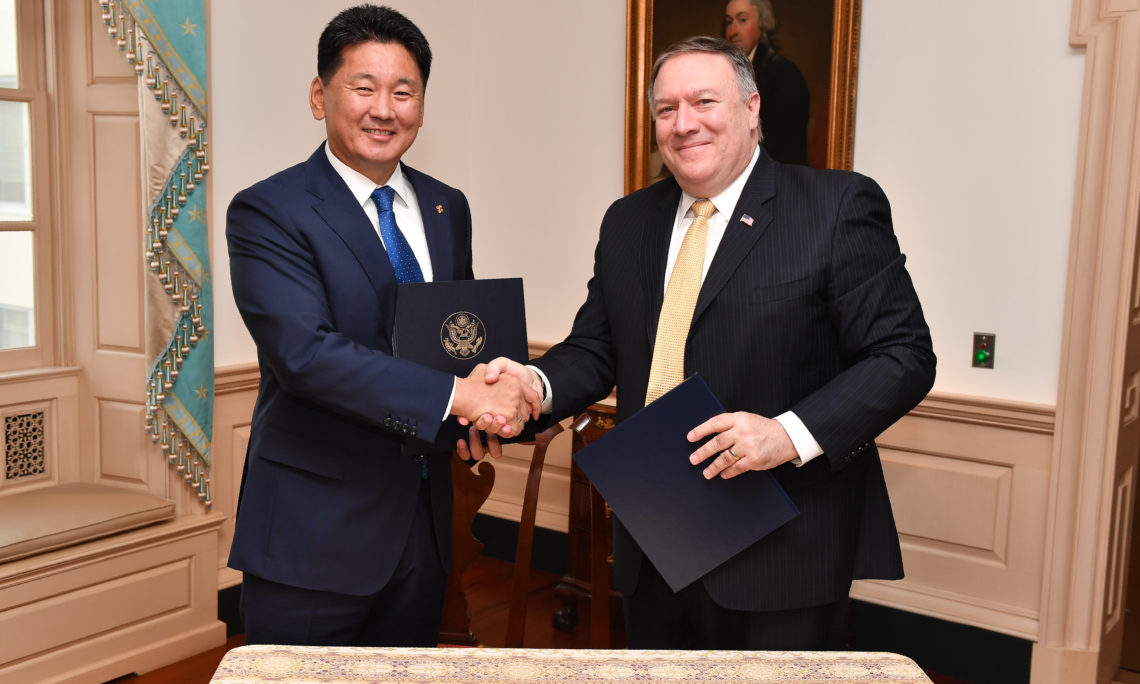 The United States and Mongolia, recognizing that persistent efforts by both sides across thirty-one years of diplomatic relations have deepened political, economic, educational, cultural and people-to-people ties between the two countries, declared that their bilateral relationship had reached a new level of expanded comprehensive partnership.

The two sides recognized that the basic principles set forth in the 2007 Declaration of Principles for Closer Cooperation, and supported by the 2004 and 2005 U.S-Mongolia Joint Statements, have provided a solid foundation for the development of a relationship based on shared values and common strategic interests. Both countries reaffirmed their commitment to these principles as they pursue avenues to further broaden and deepen their bilateral relationship.

The United States hailed Mongolia’s transformation into a free and democratic society, reaffirming both the friendship between the two countries and Mongolia’s role as an important Indo-Pacific partner. Mongolia expressed appreciation both for the unwavering support of the United States during Mongolia’s transition to democracy and for continued U.S. partnership as Mongolia works to strengthen its market economy, build strong governance institutions, and foster sustainable economic development. Mongolia reaffirmed the role of the United States as a significant third neighbor, a close friend, and an important partner.

The United States commended Mongolia for the long and distinguished service of Mongolian forces serving in Afghanistan and expressed anticipation for its contribution to the Resolute Support Mission beyond 2018. The United States also expressed appreciation for Mongolia’s contributions to global peacekeeping, including its efforts to enhance the peacekeeping ability of other nations through the Khaan Quest exercises. Mongolia thanked the United States for its support of the exercises and of capacity building within the Mongolian armed forces. Both sides pledged to continue to provide mutual support in their shared pursuit of a secure, stable, prosperous world of independent and sovereign countries.

Both sides also reaffirmed the essential importance to regional and global security of the final, fully verified denuclearization of the DPRK, and pledged to continue cooperation and information sharing to ensure the full implementation of all UN Security Council resolutions. The United States thanked Mongolia for its assistance in this regard and urged continued support for the efforts of the international community.

Under the new expanded comprehensive Partnership, Mongolia and the United States expressed their intent to strengthen their shared economic, trade, and investment relationship for the benefit of both peoples. To that end, both sides noted with approval the completion of the “Roadmap for Expanded Economic Partnership between the United States of America and Mongolia” and expressed their desire to take positive and effective measures to expand economic relations.

Both sides welcomed the signing of Mongolia’s second Millennium Challenge Corporation Compact, which will support vital improvements to infrastructure supplying water to Ulaanbaatar, and will secure the long-term sustainability of that infrastructure through policy reforms. The United States observed that the Compact is representative of the U.S. desire to protect and promote the principles of freedom, openness, sovereignty, and transparency in Mongolia and across the region. Mongolia highlighted that the Compact is a symbol of the lasting friendship between the Mongolian and American peoples; and it has an important contribution to the economic development of Mongolia.

Recognizing that a stable investment and financial environment is an essential component of deepened U.S.-Mongolia economic relations, both sides acknowledged the importance of strengthening Mongolia’s defenses against financial crimes, improving transparency, and securing macroeconomic stability. Mongolia expressed support for further cooperation on developing its anti-money laundering and countering the financing of terrorism regimes, and reiterated the country’s commitment to fulfilling its commitments as part of its IMF program.

The United States and Mongolia affirmed that the two countries’ shared commitment to freedom, democracy, and human rights represented a cornerstone of their bilateral relationship. Mongolia thanked the United States for hosting the Ministerial to Advance Religious Freedom, and expressed Mongolia’s desire to promote religious freedom in the Asia-Pacific region and around the world. The United States welcomed Mongolia’s announcement at July’s Ministerial to Advance Religious Freedom of its appointment of an Ambassador at Large for Religious Freedom. Both sides committed to explore avenues through which to deepen cooperation in securing and expanding religious freedom, with Mongolia as a leader on this issue in the region.

Underscoring the importance of cultural and educational cooperation, the two countries reaffirmed their commitment to broadening educational programs through public-private partnerships, increasing direct exchanges, promoting both commercial and non-commercial cultural exchanges, and enhancing collaboration through an increase of Peace Corps volunteers and their activities in Mongolia, including, but not limited to, expanded English language teaching programs. With the view of deepening these ties, Mongolia and the United States agreed to announce 2019 as the “U.S.-Mongolia Youth Year.”

The two sides also noted the importance of maintaining the frequency of high-level dialogues and bilateral mechanisms, including the Annual Bilateral Consultations, defense talks, the Economic Policy Dialogue, TIFA talks, and the Energy Cooperation Dialogue to discuss and collaborate on efforts to advance bilateral priorities and international peace and prosperity.

Mongolia and the United States reaffirmed their shared commitment to the principles of democracy, good governance, respect for human rights, and promotion of peace, stability, and prosperity in the region and beyond in the spirit of true partnership.