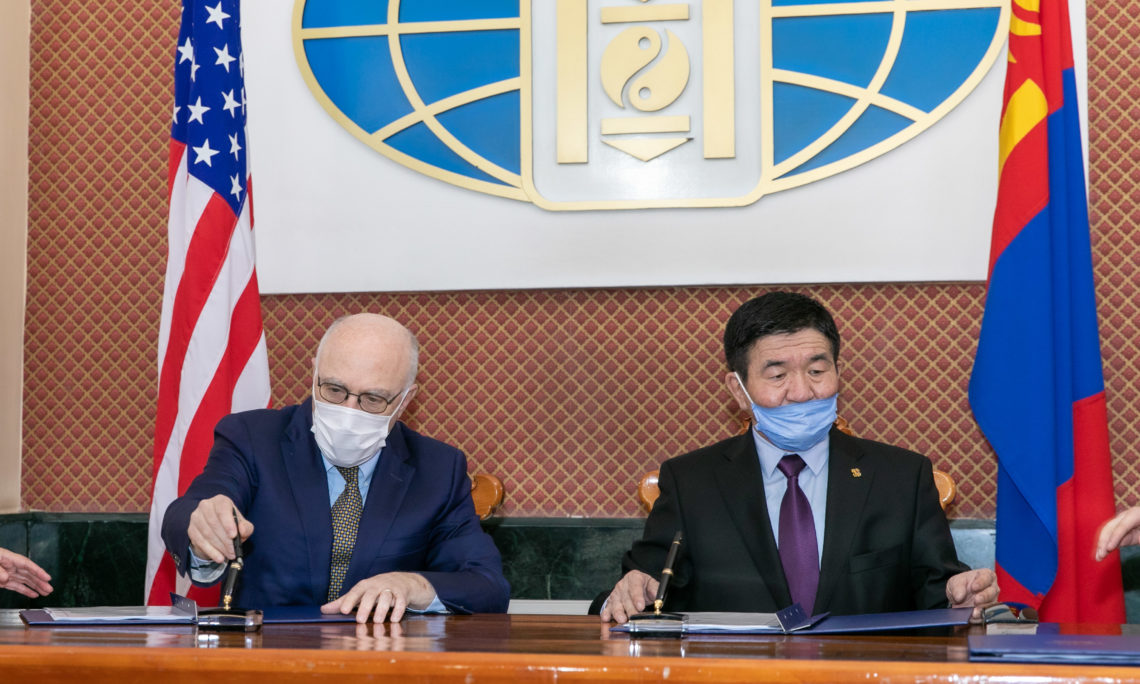 Ulaanbaatar, Mongolia, April 2, 2020 – U.S. Ambassador to Mongolia Michael Klecheski and Senior Mongolian Officials, including Minister of Justice and Home Affairs Nyamdorj Ts., Minister of Labor and Social Protection Chinzorig S., and Prosecutor General Jargalsaikhan B., today signed a historic partnership to combat child sex trafficking and forced child labor in Mongolia.  Implementation of this four-year partnership will strengthen the efforts of the Mongolian government, law enforcement and prosecutors, NGOs, and civil society organizations to fight all forms of child trafficking in Mongolia.

The Partnership signing comes after several months of high-level discussions between representatives of relevant Mongolian ministries and offices and the U.S. Department of State’s Office to Monitor and Combat Trafficking in Persons (TIP Office), which is responsible for leading the Department’s global engagement to combat human trafficking.

With the signing of this CPC Partnership, the TIP Office commits to providing approximately $5 million (nearly 15 billion MNT) in U.S. foreign assistance to nongovernmental and international organizations that will collaborate with members of the Mongolian National Sub-Council on Trafficking in Persons, which leads interagency efforts to combat human trafficking.  The Partnership’s objectives include improving interagency coordination and collaboration, improving Mongolia’s  investigation and prosecution of child traffickers, strengthening Mongolian and civil society capacity to provide comprehensive trauma-informed care for child trafficking victims, and expanding community understanding of the risks and indicators of child trafficking as well as how to take appropriate action to prevent child trafficking in all its forms.

Mongolian children are especially vulnerable to forced labor in informal sectors of the economy, such as horseracing, herding and animal husbandry. Children left alone at home are also at an elevated risk of sex trafficking and in some cases family members may be complicit in child sex trafficking and forced child labor.

The TIP Office will begin selecting implementing partners through a competitive grant process and will soon post a Notice of Funding Opportunity (NOFO) soliciting applications for projects that support implementation of the CPC Partnership’s objectives.

Though unable to attend the signing, United States Ambassador-at-Large to Monitor and Combat Trafficking in Person John Cotton Richmond expressed his robust support for the Partnership stating, “Because of this agreement and Mongolia’s commitment to fight child trafficking, this partnership is poised to have a massive impact on stopping traffickers and holding them accountable in Ulaanbaatar.”

Recognizing the significance of today’s signing, Ambassador Klecheski noted, “I am honored to represent the United States in signing this historic Child Protection Compact Partnership, which came about because of the strong joint commitment our two countries have made to combat child trafficking, and has the potential to make a real and enduring difference in children’s lives here in Mongolia.”