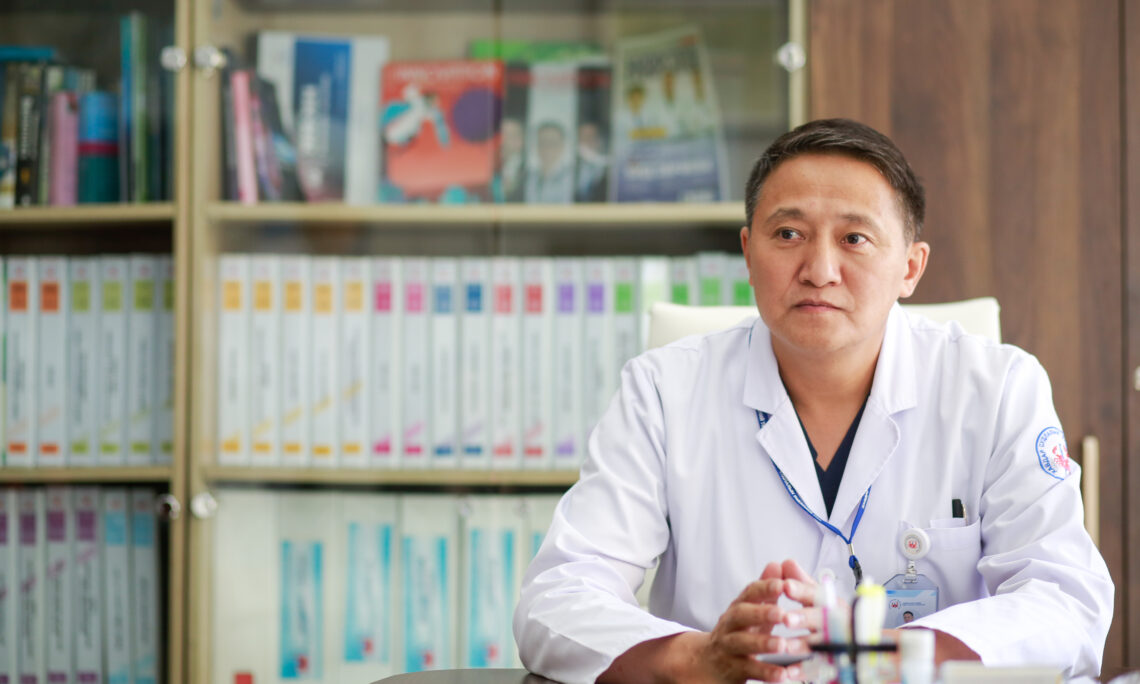 Born as the youngest of a cattle ranching family in Uvs province, Dr. Erdenekhuu Nansalmaa went on to become the dean of the education policy and management department at the leading medical university in Mongolia, the Mongolian National University of Medical Sciences (MNUMS), and later interim director of the National Cancer Center of Mongolia.

He overcame many obstacles on his academic and professional journey.  After high school, he initially failed to be accepted to the prestigious MNUMS but was admitted after an intensive year of study and successfully passing entrance exams.  Dr. Erdenekhuu was inspired by the words of former U.S. First Lady and first chairperson of the United Nations Commission on Human Rights Eleanor Roosevelt: “The future belongs to those who believe in the beauty of their dreams.”

After graduation he worked as a doctor at the national trauma and orthopedic research center for three years but decided that directly treating patients was not enough.  “I devoted myself to public health because I thought I could help and serve many more people,” he said in an interview with his alma mater in 2015.

While teaching and working as a primary researcher at MNUMS he received several research grants from international organizations including the Asia Foundation, an Austrian Technology Award, the World Health Organization (WHO) Mongolia, a Yonsei University research grant, and the U.S. Millennium Challenge Account in Mongolia.

Dr. Erdenekhuu then joined the Ministry of Health as an officer in charge of health professional education policy and a senior official of the public administration and management division, where he helped create human resource policies and programs to improve public health care access and quality.  His policy research on promoting health equity through capacity building of primary health care workers was published in WHO’s policy paper and he was invited to present this work at a WHO high level meeting on health equity.

In 2009, Dr. Erdenekhuu received a competitive and prestigious Fulbright scholarship, and in 2011 graduated from the Georgia State University school of public health with a graduate degree in health management and policy.

After receiving his degree, he worked at the U.S. Centers for Disease Control and Prevention (CDC), the premier public health U.S. federal agency within the U.S. Department of Health and Human Services, as a human resource for health fellow research analyst.  There, he made key contributions of critical importance to the U.S. President’s emergency plan for AIDS relief program and the global effort to strengthen health systems of developing countries.  This experience helped develop Dr. Erdenekhuu’s expertise in addressing the needs of the healthcare workforce, particularly in governments and ministries, in a global context.

Immediately after returning to his home country, Dr. Erdenekhuu was appointed as the dean of the education policy and management department at MNUMS with an aspiration to apply the knowledge and experience gained in the United States to improve healthcare education and practice.

In December 2019, Dr. Erdenekhuu was appointed as the interim director of the National Cancer Center of Mongolia (NCCM).  Today he works to strengthen cancer care and prevention systems and increase cancer patients’ survival rates.  Under his leadership NCCM has been implementing several projects, including the “Reducing Cancer Burden in Mongolia: Co-developing an Evidence-based Plan to Strengthen the Health Care System and Inform Policy’’ project with Queens University in Belfast, Northern Ireland, and ‘’Improving the Quality of Radiotherapy Services for Common Cancers Through the Implementation of Linear Accelerator Based Stereotactic Body Radiation Therapy’’ with the International Atomic Energy Agency (IAEA) to improve radiation therapy in Mongolia. He also has plans to implement several key projects, including a cancer prevention and screening center to improve prevention and early diagnostics, and a cancer care rehabilitation clinic, which is in great demand by cancer patients who require follow-up treatment, detoxification, nutritional and immune system support, psychological care, and physical rehabilitation.

With his record of academic excellence and professional achievements, Dr. Erdenekhuu is continuing to strengthen the Mongolian healthcare system and making meaningful contributions to our communities and our world.