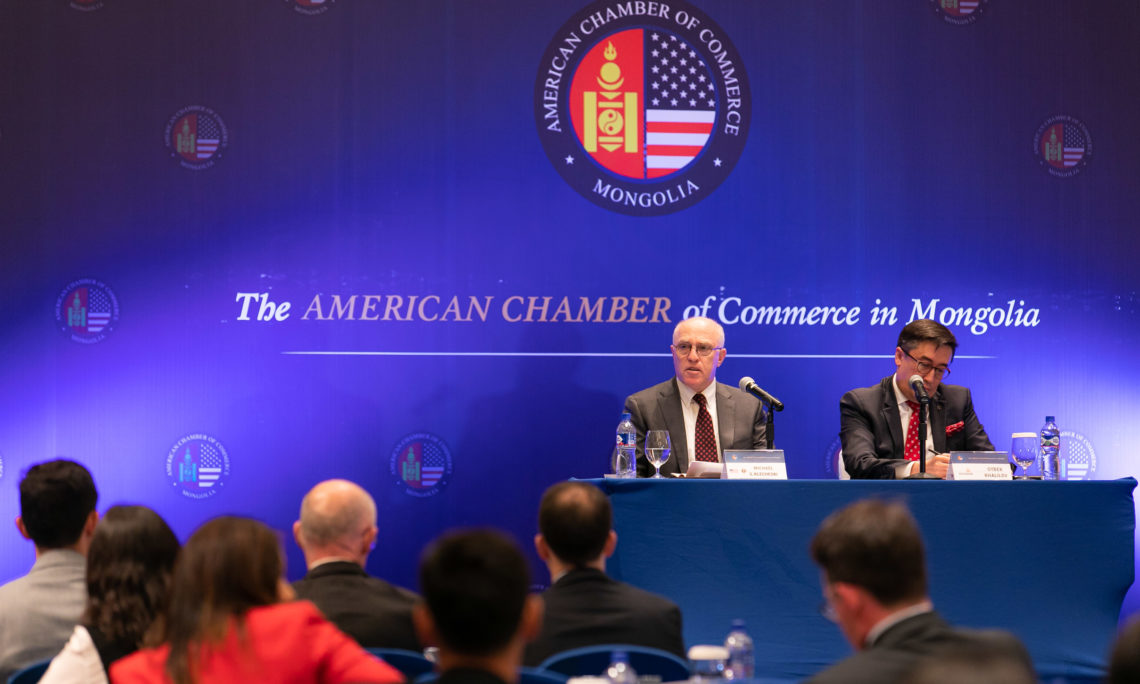 Oybek, guests, thank you for the warm welcome and invitation to speak.  I’ve truly enjoyed the engagement with AmCham and the business community, as I have everywhere I’ve served, throughout the world. From the networking nights to events like this, Amcham has been a great partner for us at this embassy.  It’s allowed me to learn a lot from you, in my three-plus months in Mongolia, and I hope today to return the favor by outlining, in a direct way, the state of the bilateral relationship.

The relationship is much broader than economic and commercial ties, of course, a fact that was clear – to me and to all those who attended – from the tremendous range of cooperation discussed in the Annual Bilateral Consultations, ABCs, held in DC last month. (Bureaucrats seem to love acronyms; I hope to limit myself to just a few today.) We’re just coming up on a major peacekeeping exercise, Khan Quest, in which the US plays a big role every year, and this year is no exception, and we hope to have high-level participation by US “brass.” That was something I’ve long known about, but in my time here, I keep running into new areas of cooperation as our ties expand. I’ll touch on some of that as I focus, in my remarks, particularly on the commercial relationship.

By way of starters in terms of trade, it’s worth reviewing where we’re at.  Total trade in 2018 rose 47 percent compared to 2017, up to $121 million. Our biggest exports to Mongolia are machines, such as mining and agricultural equipment, and some vehicles.  For the most part, these are imports that enable Mongolia to export, especially mining ore.

But $121 million is nowhere near the 2011 peak of $707 million, which in today’s dollars would be $800 million.  A lot of this was driven by investment in Oyu Tolgoi, with the US ExIm Bank financing a good portion of it. Many of us in this room – myself and my embassy colleagues like our Economic Chief Ben Leroy as much as anyone – are eager to see this relationship move back toward that peak, so let’s think of ways to get there.

Mining is obviously the biggest sector in the economy.  It brings all kinds of benefits to Mongolia. The Mining Ministry tells us that mining revenues alone account for 30 percent of the national budget, for example, and we know its impact on job creation.  The more OTs this country has, the more opportunities to share wealth with the Mongolian people.

Aside from the 35 percent U.S. equity-ownership stake in OT (it’s actually more than the government’s!), there are tremendous commercial opportunities when government officials (and I am certainly one) don’t micromanage the private sector, and let you folks here in this room do your thing.

U.S. investors are interested in mining exploration, but Oyu Tolgoi is certainly a bellwether for investment decisions for them and others.  There are also questions about the wisdom of government equity ownership in mines, among others.

We discussed these issues at our Trade and Investment Framework Agreement – or TIFA – meeting just one month ago in Washington, just before those ABCs.  This was the first such meeting to discuss bilateral trade and investment issues in four years. Recognizing that this should be an annual event, Mongolia plans to host the next such meeting in Ulaanbaatar next year.

The Deputy U.S. Trade Representative, Ambassador Jeff Gerrish, opened the meeting – he’s USTR’s number two official, showing just how seriously we take the relationship with Mongolia. What followed was a frank discussion about the Transparency Agreement.  This agreement, which our two governments signed onto in 2013 to improve Mongolia’s investment climate, requires that new laws and regulations that affect international commerce first be published for a 60-day comment period before becoming final.

The Agreement entered-into-force in March 2017, so we’re two years behind schedule, a fact that both sides recognize.  Hopefully, by the next TIFA, Mongolia will have a website up and running that will serve as a portal for publishing these draft rules.

We also discussed the Investment Climate, and I can’t thank Amcham enough for having provided feedback.  Your discussions with us at the embassy formed the basis of the longest portion of USTR’s discussions with Mongolia.

We were encouraged that the National Development Agency agreed to meet separately with Amcham and the members to hear your concerns directly regarding their plans to reshape Mongolia’s investment policy.  Our own experience shows how important it is for government to engage directly with industry when shaping new rules so that balance can be found between public, private, and government interests.

We expressed concerns that the new tax law did not adequately incorporate investor sentiment, for example, and noted that such lack of engagement has led to a situation where foreign investors are not allowed to deduct their expenses from their income for tax purposes.

All of this is to say, we are listening to you, we are working for you, and if there’s more you think we can or should do, we’re all ears.  We want our companies to be successful in Mongolia. We want our Certified Trade Mission at the end of August to mean that we’ll have even more companies gathered in this room next year.  I’m looking forward to that, and to seeing all of you at the American Days Expo.

But more than just the commercial opportunities, we really need more U.S. business and the values it brings to Mongolia.  We talk a lot about private sector-led growth as part of the Indo Pacific strategy, of which Mongolia is very much a part.  One of our jobs at the embassy is translating those overarching objectives into real positive progress.

Our Expanded Comprehensive Partnership is a recognition of what the US and Mongolia have already achieved and the potential of what is still to come.  For business, that means increasing international best practices and transparency in Mongolia.

It’s important to note the work we are doing to bolster the rule of law here.  In cooperation with the U.S. Congress, for more than five years the U.S. Embassy has arranged multi-week immersion training for Mongolian Judges in the US.  On these programs, judges meet their U.S. counterparts and gain exposure to concepts such as plea bargaining and the U.S. approach to adjudicating commercial disputes.  They homestay with sitting U.S. judges, so they get an intimate view of daily life in my country. They can then bring these experiences and observations back to their offices and chambers here, newly armed with novel solutions to challenging problems.  We have similar programs for prosecutors and parliamentarians. All these efforts add up to key decision makers gaining an increased understanding of America, our processes and our values.

We are also taking the long view, working to build strong relationships between our citizens and to build a competitive workforce through English training, educational scholarships, and professional exchanges.  The fact that 2019 is the US- Mongolia Year of Youth certainly reflects that long view as well.

During this campaign, we will spend around $2 million on educational and professional exchanges for young people.  We are permanently expanding the Fulbright Program and the English Language Fellowship program. We created a new science and technology-focused Maker Space at the American Corner in Ulaanbaatar, and are continuing to bring American Peace Corps volunteers to teach English across the country.  In finance, cybersecurity, entrepreneurship, IT technology, and professional journalism, we are sending future leaders in many fields on professional exchanges in the United States. This will all help make sure that when you grow your businesses, you have the skills and talent you need to hire right here.

And for those officials unable to travel to the US, we bring training and expertise to them.  Thanks to U.S. support and technical assistance, Mongolia continues to improve its border control and monitoring.  For businesses, that translates into a more level playing field with fewer competitors able to skirt import-export regulations.  Likewise, training by our Drug Enforcement Administration and Federal Bureau of Investigation has strengthened the ability of Mongolian anti-drug officials to confront drug-related crimes, resulting in improved social fabric.  As business leaders, you well know the value of a sober, engaged workforce.

Americans have an abiding assumption that there’s simply no substitute for private sector-led growth.  For Mongolia to bolster its economic sovereignty and continue building up its international reserves, only the private sector can provide the sustainable economic growth that so many people depend on.

That’s not to say there isn’t space for government programs.  In partnership with the Government of Mongolia, our $350 million grant-finance Millennium Challenge Corporation project will increase the supply of fresh water in Ulaanbaatar by 80 percent and help drive further economic growth.  It’s a grant, not a loan, with no concerns about debt traps. This program has begun the detail design phase, and I am pleased to note that the U.S. consulting engineer AECOM and local partner Prestige were awarded the detailed design contract for the new downstream wells and advanced water purification plant.

Future contracts for the construction phase are contingent on the Government of Mongolia meeting various conditions precedent, and we look forward to the participation of U.S. firms in this phase as well.

We’re also looking forward, this fall, to a fulltime Treasury Resident Advisor being posted to the Bank of Mongolia. He or she will help Mongolia walk through the Financial Action Task Force process of building up sufficiently strong anti-money laundering regulations.

I’m very much aware of the importance of this both to the business community and, more broadly, to Mongolia’s economic sovereignty.  We’re working hard and, I think in the long run, this process will prove very beneficial for Mongolia.

Looking ahead in the economic relationship, we see a number of key priorities, but none more important, and perhaps more readily attainable, than improving process and transparency, which fits so well with the fight against corruption.  And in that regard, the Transparency Agreement is fundamental. I look forward to seeing real progress in its implementation.

Further progress in terms of air liberalization would also be helpful.  The new routes to South Korea and Kazakhstan were a positive step forward; we’re hoping to see the Ministry of Roads and Transportation continue on this trajectory.  We would also welcome its approval of the FAA technical review process, to help improve the safety and security of Mongolia’s civil aviation system.

I could go on, but fundamentally, we need to hear from you on the ground where you think we need to go.  You in the private sector are the embassy’s eyes and ears, the ones who engage on these important economic issues on a daily basis.  So while it’s been a pleasure addressing you, I’d welcome a chance to hear from you now about your vision for the U.S.-Mongolia economic relationship.