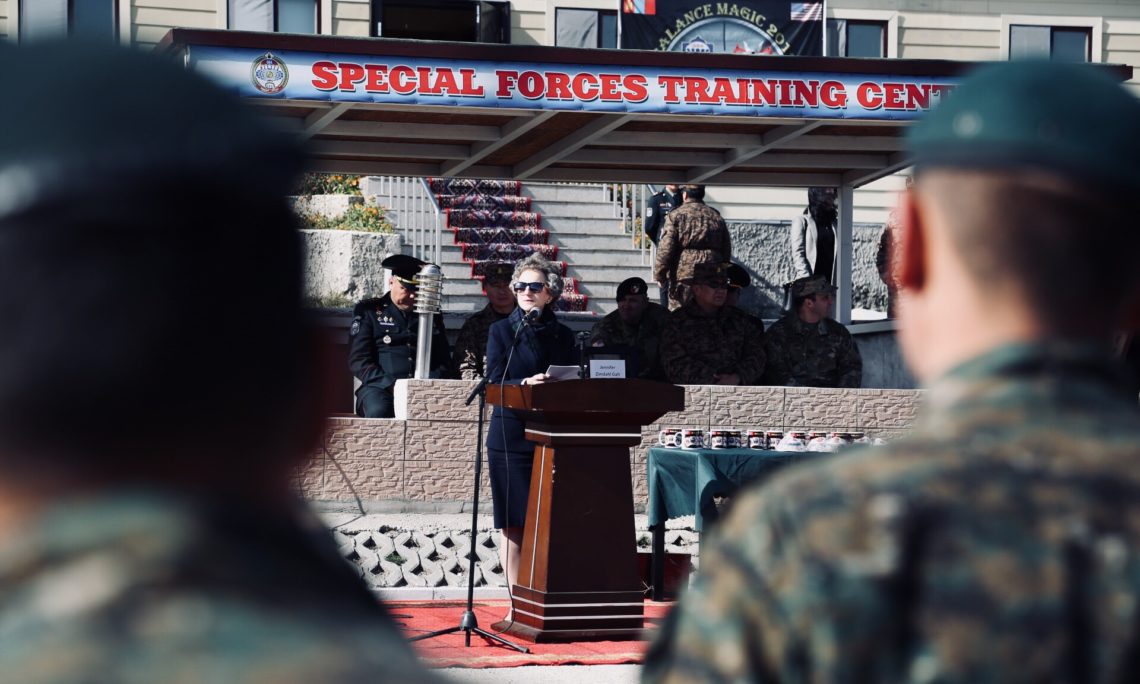 It is a privilege to be with you and always a pleasure to visit with the elite members of the Mongolian Armed Forces.

I am a staunch supporter of Mongolia’s world-class peacekeeping efforts, your constant dedication to military professionalization, and the joint training conducted between our two countries’ Special Operations Forces.

I have heard many good things about the training you have conducted here over the last month.

Today’s closing ceremony for Balance Magic 2017 is another high point during this 30th year of U.S.-Mongolia diplomatic relations.

One of the brightest elements of our deepening partnership is our multifaceted and robust military relationship.

U.S. Special Operations Command – Pacific and the Mongolian Armed Forces have one of the deepest and most comprehensive partnerships within the U.S.-Mongolian military relationship.

This is a testament to the Special Forces truths that humans are more important than hardware, that quality is better than quantity, and that Special Operations Forces cannot be mass produced.

It is fitting in this 30th anniversary year that U.S. Special Operations Command – Pacific has sent its largest training element to date to train with Mongolia’s most elite unit, Unit 084.

Over the past five years, 1st Special Forces Group and Unit 084 have built a higher level of confidence in each other through these annual exercises.

This exercise pushed the relationship between the United States and Mongolia to a new level of cooperation.

Unit 084 staff synchronized operations that included Mongolian Armed Forces helicopters, horses, and all the techniques trained throughout the exercise.

Through this month’s rigorous and realistic training, the soldiers of our two countries are better prepared to help bring peace to the world’s most war-torn corners, from Afghanistan to South Sudan to wherever else we are called on to provide security.

I am confident this Balance Magic training will pay dividends when Unit 084 deploys a company to South Sudan later this year as the United Nations Special Operations Forces Quick Reaction Force.

I would like to take this opportunity to thank the Government of Mongolia for its continued troop contributions to the Resolute Support Mission in Afghanistan and to UN peacekeeping operations across the globe.

Mongolia is an extraordinary and essential partner, and the United States and our coalition partners are grateful for your steadfast support.

I want to personally thank those of you in the audience today who have served in Afghanistan, Iraq, South Sudan, or another peacekeeping mission.

The United States and the entire international community greatly appreciate your service, your dedication to duty, and your contributions to maintaining global peace and security.

Your reputation for excellence, discipline, and respect for human rights is known the world over and you represent your country to the highest standards of your profession.

It is my pleasure to close this excellent exercise.

I wish you the best in your future missions.

Good luck, maintain the personal relationships developed in the course of Balance Magic 2017, and safe travels.