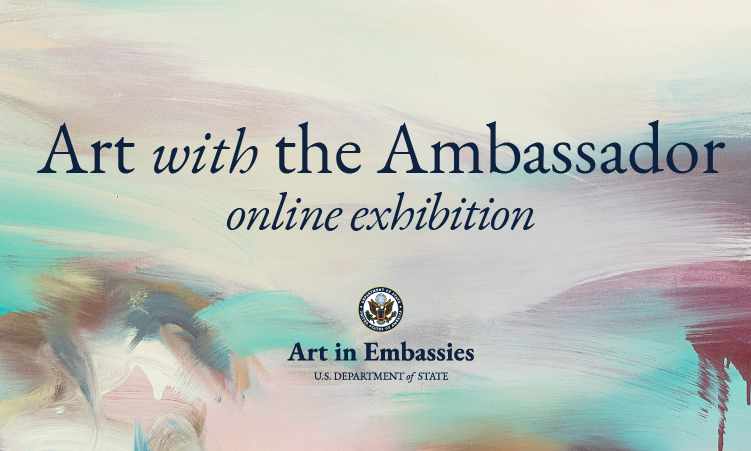 On February 16, 2022, U.S. Ambassador to Mongolia, Michael Klecheski hosted an online exhibition “Art with the Ambassador”, featuring the collection of original American artwork provided by the Art in Embassies (AIE) program. AIE is a U.S. cultural diplomacy program focused on cross-cultural dialogue and understanding through the visual arts and dynamic artist exchange. The program engages with over 20,000 participants globally, including artists, museums, galleries, universities, and private collectors. It encompasses over 200 venues in 189 countries.

Our “Art with the Ambassador” online exhibition presented – one of 60 exhibitions that have been installed in U.S. diplomatic facilities throughout the world – the 2020-2022 Mongolia edition of the AIE program which had nine artworks of six New York based American artists. This collection was particularly special that it included three original works of world renowned artist Nam Jun Paik, who is often hailed as the “father of video art.” To learn more, we recommend you to watch the Smithsonian American Art Museum’s insight on his most iconic artwork “Electronic Superhighway” available here.

At the online exhibition, AIE Cultural Programs Curator, Welmoed Laanstra, gave opening remarks, Ambassador Klecheski gave a live tour of the nine artworks, and artists Rachael Wren and Suzanne Unrein connected live from the U.S., to talk about the styles and inspiration behind their work, giving as a sneak peak of their current works and their artist studios. Artist Samantha Morris also sent us a video message for the event, giving us a close-up look into her studio and her recent works. The nephew and the executor of state of Nam June Paik, TV personality “Dr. Fad”, Ken Hakuta, also sent a warm message dedicated to the event.

This event was virtual, using the ZOOM platform. 100+ individuals signed up for the event, and American Corners operating in five cities and provinces (Ulaanbaatar, Darkhan, Khovd, Uvs, and Dornogovi) live-streamed the event to groups of individuals in rural parts of Mongolia. We are happy to share the main presentation portion of the event with Mongolian subtitles. We are grateful for the AIE program, the Art in Res. online platform that made the artwork available, and the wonderful artists who connected live, sent their personalized greetings and contributed their art works.

The brochure for the Art in Embassies Collection can be viewed here.

Rachael Wren received a Bachelor of Arts degree from the University of Pennsylvania, Philadelphia, and a master’s in fine arts from the University of Washington, Seattle. She has exhibited her work in galleries and museums nationally and internationally, including the National Academy Museum (New York), the Weatherspoon Art Museum (Greensboro, North Carolina), the Teckningsmuseet (Laholm, Sweden), and Wave Hill (New York). Wren is the recipient of the Julius Hallgarten Prize from the National Academy Museum and an Aljira Fellowship. She lives and works in Brooklyn, New York.