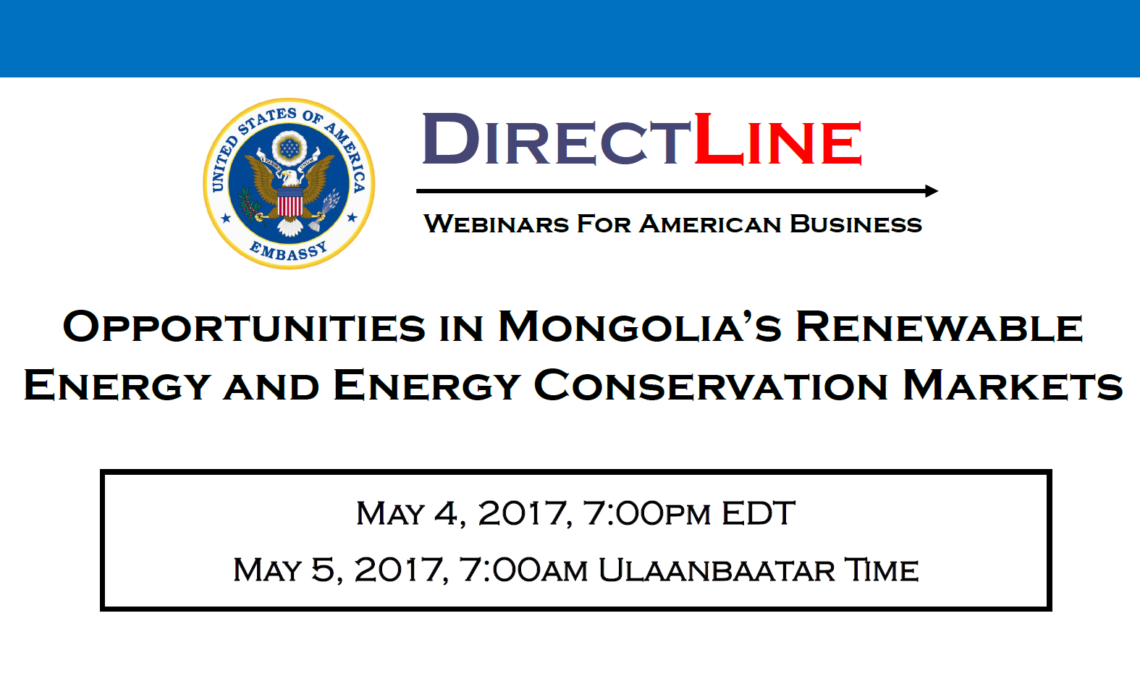 I am pleased to have with me today Mr. Angarag, Head of the Renewable Energy Division in the Ministry of Energy, and Mr. Narantuguldur of Engie Group.

I also have with me key members of my Team, Economic Chief John McDaniel and Senior Commercial Specialist Michael Richmond.

Before I begin, I’d like to remind everyone that you can find detailed information on Mongolia’s business environment in our 2016 Mongolia Country Commercial Guide and 2016 Investment Climate Statement, both of which are available on our Embassy website.

This is another in a series of Mongolia Direct Line Presentations to explore reinvestment opportunities in Mongolia’s key business sectors.

I’ll start off with an overview of the current energy environment and potential for U.S. commercial engagement from the perspective of the U.S. Embassy.

Mr. Angarag and Mr. Narantuguldur will then give some specifics on the industry view and the Mongolian government’s policy and vision.

The remaining time will be for your questions.

So, first, an overview.  Mongolia is something of a hybrid in the energy sector.

Its primary energy grid is still predominantly the old system, built by the Soviets in the 1970s and 1980s.

Central to Mongolia’s energy challenge is that its population has grown by more than a million people since its decision for democracy in 1990, but its power grid has changed little, leaving a large percentage of the population literally “off the grid.”

At the same time, with abundant sunshine and wind, Mongolia is well positioned to be a leader in alternative, renewable energy.

There are already small scale projects – one wind farm just outside Ulaanbaatar, which was invested in by GE and the Millennium Challenge Corporation; another wind farm coming up in the Gobi in southern Mongolia; and solar panels on gers across the vast steppe used by individual herders to charge their smart phones, power their satellite dishes, and to run small electrical appliances.

Mongolia is richly endowed with coal and other mineral resources.

It is coal that powers its aging fleet of power plants, desperately in need of an update.

Currently, Mongolia generates 80 percent of its domestic energy needs and imports the remainder from Russia and China, its two immediate neighbors.

Against this backdrop, the government of Mongolia has made energy sector development a priority.  It sees a thriving energy sector as essential for national security, social stability, and economic development.

Consequently, the nation is looking for public and private solutions to improve base load generation and energy storage; identify different approaches to generating electricity and heat  (the latter being essential during Mongolia’s harsh, long winters); and increase energy efficiency and conservation.

The government has told us that it wants to use a mixture of public and private approaches to reform and rehabilitate its energy sector but ultimately seeks to transform it primarily through free market approaches.

However, the government admits that the condition of Mongolia’s energy markets is less than appealing.

The government acknowledges that low electric energy tariffs and an undeveloped regulatory environment inhibit private investment into projects of medium and large scale.

Despite these potential sources of renewable energy, however, of the almost one gigawatt (GW) of domestic capacity, 85 percent currently comes from coal and seven percent from diesel generators.

Only about eight percent comes from renewable sources, with five percent wind, two percent hydropower, and less than one percent from small renewable energy sources with under five megawatts (MW) installed capacity.

The government has incentivized renewable energy generation by putting into its law guaranteed rates for solar energy, 15 to 18 cents per kilowatt-hour (kWh), and wind energy, 8.5 cents per kilowatt-hour (kWh).  While these numbers add certainty to investment calculations, the government remains cautious about approving new renewable projects and providing these subsidies.

Because of the inflexibility of the Soviet-era power plants, however, it is nearly impossible to adjust outputs to account for variable solar and wind outputs.

Mongolia is searching for ways to insert flexibility into the electrical grids, whether through storage, hydropower, or introducing more flexible power generation plants.  However, Mongolia has yet to identify and move forward with viable solutions.

I would also note that Mongolia has ratified the Paris agreement and is committed to reducing its greenhouse gas emissions and improving energy efficiency by 20 percent by 2030.

To fulfill these commitments, Mongolia will require imported technologies and services.

Now that I have provided an overview and briefly, and realistically assessed the sector, let me briefly discuss the opportunities from our perspective.

Many large power plant projects are at varying stages of development, but all continue to face obstacles to reach completion.  Therefore, we will instead focus on the more viable small- to medium-sized opportunities that are coming up now.

First, as Mongolia taps its mineral and agricultural resources, remote mining and farming facilities – most of which will be off the central grid – will require power.

Of course, solar and wind solutions make sense, but energy storage needs to be added to the mix.

Second, Mongolia will continue to pursue small- to medium-scale renewable energy projects.  While some will focus on reducing dependence on imported electricity, renewable projects will also support Mongolia’s growing demand for energy.

Already the electrical grid has incorporated a 10 megawatt (MW) solar farm, and construction of a 50 megawatt (MW) wind farm is ongoing.  We see this steady addition of renewable energy continuing.

Third, although Mongolia has committed to reduce coal use, it will continue to generate power from coal for the foreseeable future; and so, must find a way to balance affordable energy production, which coal provides, with its foreign and domestic commitments to lower its carbon footprint, not to mention bringing vitally needed improvements in urban and rural air quality.

Mongolia will need to burn less coal and get more from the coal it burns.  This will require significant improvements in energy efficiency and conservation.

The National Green Development plan states that the government will increase investment in energy efficiency and green development by two percent of GDP annually for an unspecified period of years.

As a first step, these designated consumers, 99 large businesses and public institutions at latest count, must reduce energy consumption by 15 percent.

The number of designated consumers will also expand in the future to include smaller entities.

The government will provide incentives and levy penalties to ensure compliance with the law.

Although the Mongolian government has not formulized the specific process for these large consumers to develop energy efficiency and conservation programs, they present U.S. energy service companies engaged in diagnostics, energy management, and technology acquisition with opportunities.

We have a working list of these 99 entities that we can make available to interested U.S. businesses.

At this point, I will turn the floor over to Mr. Angarag from the Ministry of Energy, who will discuss his Ministry’s concrete plans in the areas I have covered and where it sees opportunities for U.S. exporters and investors.

I look forward to your questions.