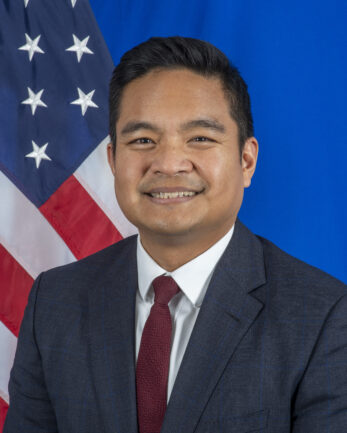 Richard Buangan is a public diplomacy-coned career member of the Senior Foreign Service who joined the Department of State in 1999. He is currently serving as U.S. Ambassador to Mongolia in Ulaanbaatar.

Richard’s overseas assignments have included Public Affairs Officer at ConGen Jerusalem, Press Attaché at Embassy Beijing, as well as entry level assignments in Paris and Abidjan.  He most recently served in the Bureau of Global Public Affairs (GPA) as Acting Assistant Secretary and as Principal Deputy Assistant Secretary.  He previously was a Deputy Assistant Secretary for Public Diplomacy and Regional Security Policy in the Bureau of East Asian and Pacific Affairs and served as an Executive Assistant to Secretary of State Michael R. Pompeo.  He has held other positions in GPA, including Managing Director for International Media and Director of the Office of Digital Engagement, and he has worked on the Executive Secretariat Staff as a Line Officer.  Richard has received numerous State Department awards and honors.

Born and raised in San Diego, California, Richard holds a Bachelor of Arts in Political Science and Economics from St. Edward’s University in Austin, Texas, and speaks French, Spanish, and Mandarin Chinese.