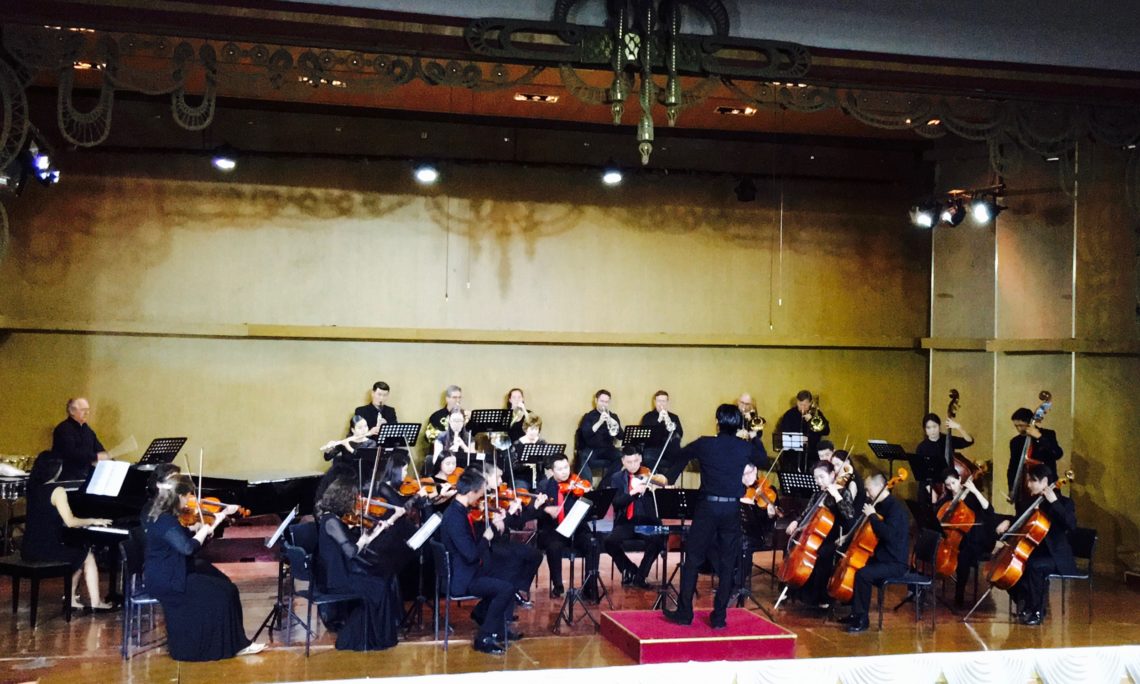 Members of the world-renowned Philadelphia Orchestra visited Mongolia June 1-4 during the orchestra’s 2017 Tour of Asia.  Eighteen musicians and nine staff, including Executive Vice President for Orchestra Advancement Ryan Fleur, conducted an intensive two-day visit June 2-3, engaging with a variety of audiences around the Ulaanbaatar area.

Programming began on June 2, with the Philadelphia Orchestra musicians conducting six master classes for students at the College of Music and Dance and the National Defense University School of Music.  Faculty, students, and their parents, as well as the Mongolian Professional Music Association’s talented musicians, facilitated the classes.

Programming continued on June 3 for a variety of audiences in dramatically different settings.  A string quartet performed a Children’s Day concert at the Mongolian Children’s Palace for an audience primarily of children, many from Ulaanbaatar’s remote areas.  At noon a brass quintet performed a pop-up concert in the Beatles Statue area for the general public.

Later that day, Mr. Fleur met with Ulaanbaatar City Governor and Mayor S. Batbold, as well as with the Deputy Chief of Staff of the Office of the President B. Nergui.  All sides agreed that the Philadelphia Orchestra musicians’ visit could serve as a stepping stone towards future cooperation.

The visit’s culmination was an evening performance on June 3 at the State Philharmonic Theater.  Rehearsals presented an opportunity for interaction between the Philharmonic musicians and their Philadelphia Orchestra counterparts.  The Philharmonic Symphony Orchestra, preparing for its upcoming 60th anniversary concert, performed Mussorgsky’s “Night on Bald Mountain,” conducted by Maestro B. Batbaatar, and a piece by Mongolia’s very own J. Chuluun, the “Uran Khas Waltz,” conducted by Maestro B. Anar, for the visiting musicians.

The public concert that followed combined the musical artistry of the United States and Mongolia in a celebration of bilateral cultural ties.  U.S. Ambassador Jennifer Zimdahl Galt and Ministry of Foreign Affairs State Secretary D. Davaasuren opened the event, as did high school students participating in the Access English language program, who performed an energetic jazz dance.  Members of the Philadelphia Orchestra then joined the Mongolian Professional Music Association’s Itgel Orchestra to perform the “Uran Khas Waltz,” conducted by Maestro O. Nyamsaikhan.  The rest of the concert, performed in three parts, prompted many to comment on the musicians’ impressive skills.

The visit ended with a reception hosted by Mayor Batbold, which featured traditional songs and dances performed by the artists and musicians of the Ulaanbaatar Ensemble.

The musicians’ visit was one of the signature events in this year’s celebration of the 30th anniversary of the establishment of diplomatic relations between the United States and Mongolia.  It was made possible largely through funding from the U.S. Department of State, with support from MIAT Mongolian Airlines, Khan Bank, Oyu Tolgoi LLC, and the Shangri-La Hotel.  The Ministry of Foreign Affairs and the Ulaanbaatar City Mayor’s Office provided communications support, ground transportation, and venue arrangements, while coordinating closely with Ulaanbaatar district representatives and cultural communities.  Local civil society organizations, including the Mongolian Professional Music Association and the Itgel Orchestra, also supported the visit.

For more on the Philadelphia Orchestra musicians’ visit to Mongolia:

Pictures and Remarks from the Visit: