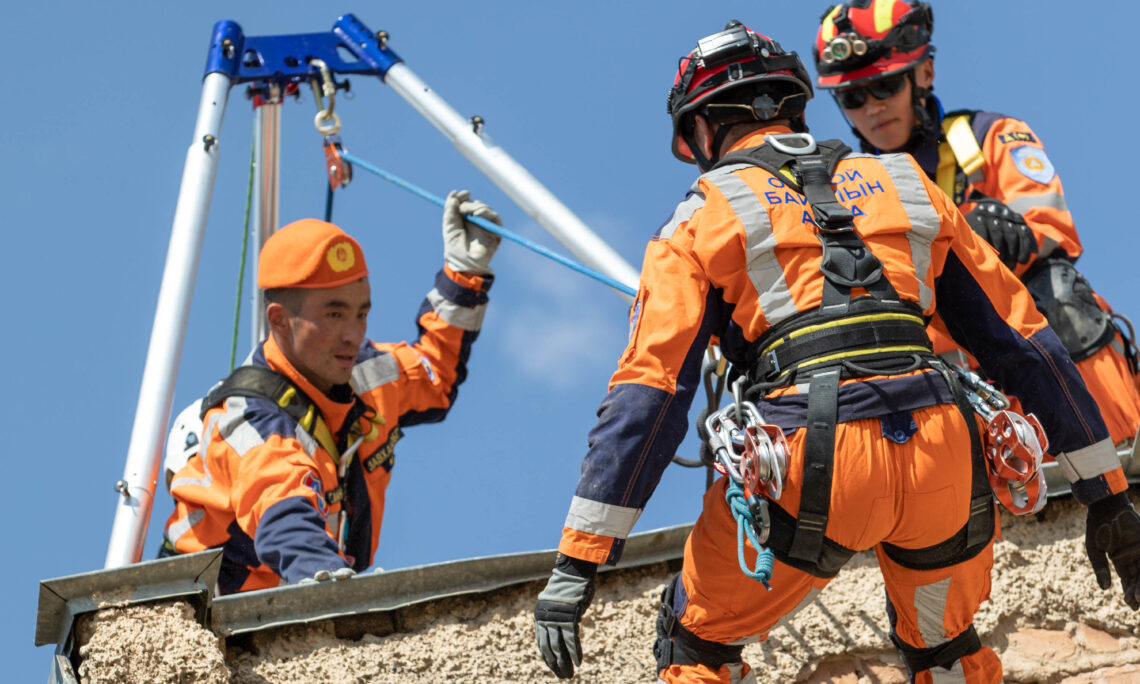 The exercise began on Sept. 5 with expert academic discussions on a myriad of subjects. One expert on the panel was U.S. Air Force Master Sgt. Mark Hoover of the 36th Contingency Response Support Squadron.

No stranger to disasters, Hoover has responded to multiple events throughout his career, such as the 9.1 magnitude earthquake in Japan and the Black Forest Fire in Colorado that burned over 14,000 acres of land.

As a subject matter expert, Hoover led discussions focusing on negative visualization – a practice in which bad things are deliberately contemplated – and continuous process improvement.

“The Gobi Wolf exercise is, in itself, negative visualization,” said Hoover. “It puts people in situations that make them think about the worst outcome. If they don’t go through it as realistically as possible and exercise their response, then an actual disaster can get worse than it already is.”

Hoover said he finds exercises like Gobi Wolf to be a winning arrangement for all involved.

“The familiarization of the methods and resources used around the world just increases our effectiveness in what we do, no matter where we are,” said Hoover.

Col. Anjankeshar Khatri, from the Nepal Armed Forces, has operated in real-world disasters including the 7.8 magnitude earthquake in Nepal in 2015. Khatri was a battalion commander at the time and is very familiar with how unpredictable disaster relief can be. With his experience, Khatri was able to closely examine the field training lanes for more insight on how to manage that unpredictability.

“Exercises like Gobi Wolf are extremely effective,” Khatri said. “At the time of a disaster there will be chaos and Gobi Wolf trains you to respond effectively and modify according to the situation.”

Khatri was especially interested in the medical lane that exhibited a Level 2 field hospital tent equipped with an intensive care unit that improves upon the Level 1 field hospital tent. Upon observing the hazmat lane during the field training demonstration, Khatri said he learned a great deal on decontamination processes.

“It was very informative to see the layout of the medical tent and learn about all its capabilities,” Khatri explained. “And I found the techniques used in the hazmat lane fascinating to watch.”

The exercise sought to exchange information with all the services and entities and succeeded in imparting valuable knowledge where it was needed. Brig. Gen. B. Uuganbayar, deputy director of the Mongolia National Emergency Management Agency, said that this exercise marked the first time NEMA conducted medevac by helicopter and established a field hospital in the Level 2 layout. In turn, Uuganbayar said, Mongolian physicians shared traditional medicines that international participants greatly appreciated.

“The exchange of knowledge between us was very successful,” said Uuganbayar. “Through the exercise we have learned from each other and improved our skills in a mutual capacity. We are very thankful.”