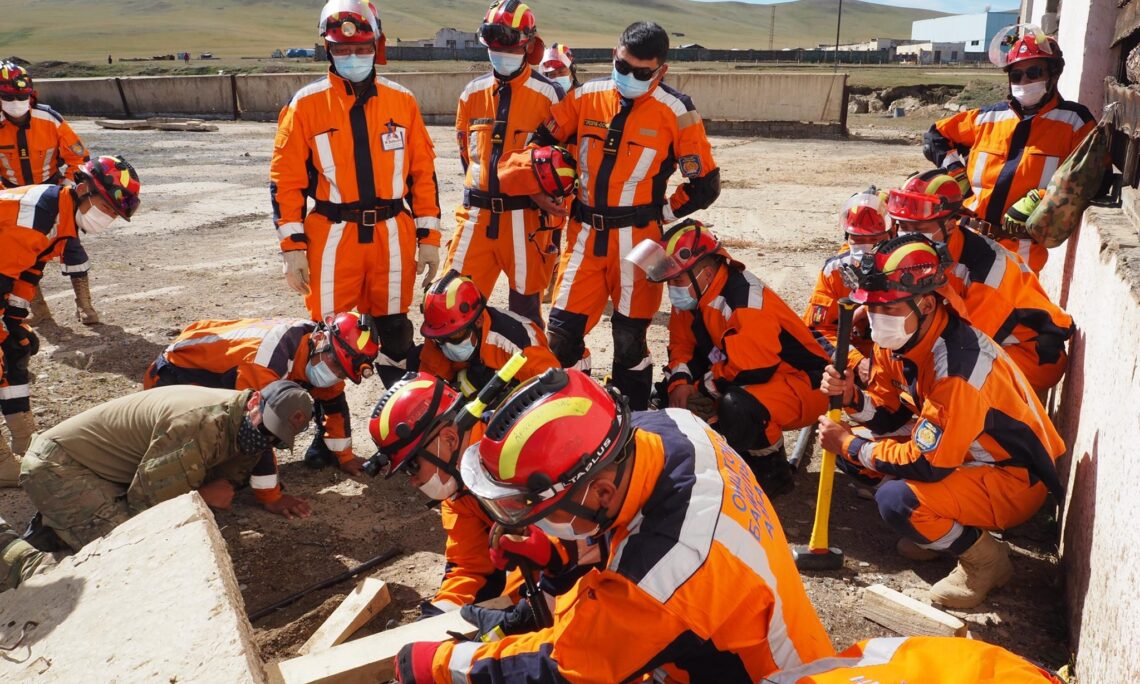 Arkhangai province, Mongolia — From September 14-23, the Civil Military Support Element of the U.S. Embassy partnered with the National Emergency Management Agency of Mongolia to organize the Khangai-21 Disaster Response Exercise in Arkhangai Province. Working together with Local Emergency Management Agencies from Arkhangai, Bayankhongor, Bulgan, Khuvsgul, Uvurkhangai, and Zavkhan medical and rescue personnel from the U.S. Air Force led training exercises in confined space and high-angle rescue, along with support training in emergency medicine, crisis communications, and emergency management. In addition to the more than 180 Mongolian participants, the defense attachés of Japan, the Republic of Korea, and the Republic of Turkey attended as observers.

Due to the risk and frequency of seismic activity in Mongolia, special focus was given to earthquake response in order to help Mongolian rescue personnel better prepare to provide assistance and relief to the people of Mongolia in the event of such a disaster. Training consisted of extensive classroom and field instruction on how to extract and evacuate disaster victims safely from confined spaces and high-angle environments. At the same time, medical personnel received training on how to triage and treat patients during an emergency. Additionally, officials from emergency operations centers received classroom instruction on efficient management and resourcing of rescue and medical personnel; how to communicate effectively with the public during a crisis; and ways to work with international non-governmental organizations to provide humanitarian relief. At the end of the training, participants successfully engaged in a large-scale exercise simulating a real-world natural disaster.

Due to the COVID-19 outbreak, the United States and Mongolia were forced to cancel the Gobi Wolf multi-national disaster response exercise held annually in Mongolia. The Khangai-21 exercise allowed U.S. and Mongolian rescue personnel to solidify their productive partnership in the interim. Lessons learned from Khangai-21 will inform planning for the much larger Gobi Wolf exercise expected to resume in 2022. Khangai-21 further enhanced the strong bonds between the United States and Mongolia while making great progress in preparing Mongolian rescuers to protect and assist the people of Mongolia in the event of a natural disaster.