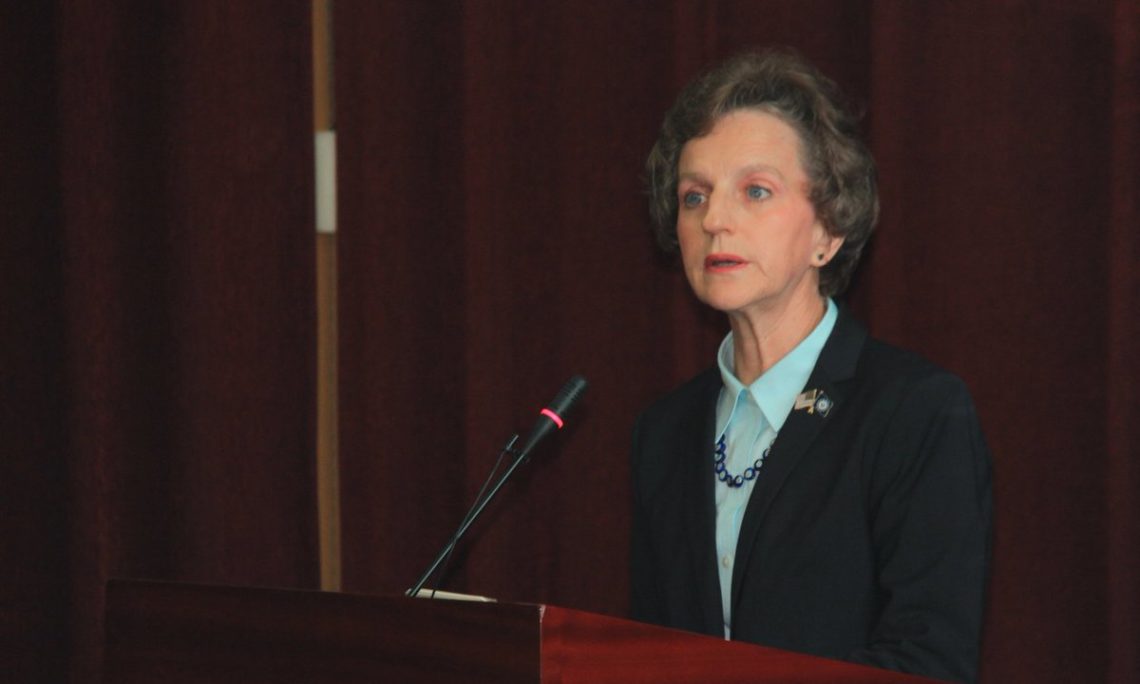 Mr. Foreign Minister, distinguished guests, and friends of the United States and Mongolia, I am delighted to be here this morning to open what promises to be a fascinating conference dedicated to the 30th anniversary of the establishment of U.S.-Mongolia diplomatic relations.

In his remarks on that occasion, Secretary Schultz noted that the United States and Mongolia share certain similarities:  both are countries of vast open spaces, and both have histories of conquering frontiers.  He went on to note that “with the establishment of diplomatic relations, we will better be able to explore those similarities, expand mutually beneficial trade, and engage in educational and cultural exchanges.”

We have done this and more since that memorandum was signed, building on our shared democratic values, strengthening our economic and trade relations, bolstering our military and defense cooperation, and expanding our people-to-people ties.

Over the last 30 years, and especially since its 1990 “decision for democracy,” Mongolia has been one of the United States’ key partners in the Asia-Pacific region.

The United States has been and remains proud to be Mongolia’s “third neighbor,” a phrase coined by U.S. Secretary of State James Baker during his historic 1990 visit to Mongolia.

Together, the United States and Mongolia have advanced democratic ideals and worked to protect human rights and fundamental freedoms.  We have partnered in the United Nations – particularly in the UN Human Rights Council – and in organizations like the Community of Democracies and the Freedom Online Coalition.

The United States has strongly supported Mongolia’s mentorship of other emerging democratic states, such as Burma and Bhutan, and we are hopeful that Mongolia’s efforts to share its experiences will continue.  Mongolia has served and can continue to serve as a model for other states – indeed, it is today an “oasis” of democracy in a tough region, as U.S. Secretary of State John Kerry stated during his June 2016 visit to Ulaanbaatar.

Together, the United States and Mongolia have built a broad economic partnership and have worked together to spur economic growth and reduce poverty, including through the U.S. Agency for International Development, which has contributed more than $240 million over the last 30 years to support Mongolia’s economic growth and democratic development.

We have also partnered through the Millennium Challenge Corporation, whose $285 million first compact with Mongolia funded the construction of a new north-south road; initiatives to reduce air pollution in Ulaanbaatar, including the provision of clean cook stoves and the building of Mongolia’s first wind farm; improvements in the prevention, diagnosis, and management of non-communicable diseases and injuries; enhancements of Mongolia’s national property registration system; and upgrades to technical education and training programs.

Reinvigorating our bilateral economic ties remains one of my highest priorities as Ambassador, and my team and I have worked hard to support the Mongolian government’s goals of diversifying the economy, establishing an internationally competitive agricultural export sector, and introducing new renewable energy sources.

To this end, we hope to foster new U.S.-Mongolia business partnerships this year by bringing a delegation of U.S. companies to Mongolia to explore trade and investment opportunities in a range of areas.  And we plan to encourage potential U.S. investors to look carefully at commercial opportunities in Mongolia, including through a series of webinars targeting specific sectors.

Of course, I was delighted that we achieved a significant milestone in our bilateral economic partnership with the January 19 signing of the U.S.-Mongolia Transparency Agreement, which will enter into force on March 20.

The agreement will pave the way for even greater bilateral commercial engagements by making Mongolia’s regulatory and legislative processes clearer for both domestic and foreign investors.

Our close cooperation is of particular importance in this time of economic difficulty in Mongolia.  The United States strongly supports the Mongolian government’s efforts to address current economic challenges, including through an IMF program, and is reaching out across the globe to encourage robust support for Mongolia, in hopes that the economy will soon be back on track.

On the military front, the United States and Mongolia have established a record of close, positive collaboration, working together to build the Mongolian Armed Forces’ peacekeeping, disaster relief, and humanitarian response capabilities.

Mongolia’s globally respected peacekeeping troops are deployed in some of the world’s toughest spots, including in South Sudan.  Mongolia has pledged additional support for UN peacekeeping operations through the creation of an internationally deployable engineering company, and we are working closely with the Mongolian military to help build this capacity.

We continue to partner in the annual Khaan Quest multilateral peacekeeping exercise, which has gotten bigger every year, and the Five Hills training center outside Ulaanbaatar, which is rapidly becoming a premier international training facility.

We have also partnered in coalition operations in Afghanistan and Iraq.  The Mongolian military served alongside our troops for five years in Iraq and has committed to staying with us in Afghanistan – and for this we are grateful.

In similar fashion, the United States and Mongolia have worked together to strengthen Mongolia’s disaster assistance and humanitarian response capabilities.  The annual Gobi Wolf exercise is a cornerstone of these efforts.

A final hallmark of the last 30 years has been the expansion of our people-to-people ties.  U.S. government-sponsored exchange programs such as Fulbright and the International Visitor Leadership Program send approximately 45 Mongolian government officials, civil society representatives, and scholars to the United States every year.

And every year, Americans conduct research in Mongolia and visit this beautiful country for a variety of reasons.  Many participate in our robust Peace Corps program:  since the arrival of the first cohort of Peace Corps volunteers in Mongolia in 1991, more than 1,250 individuals have served in every one of Mongolia’s 21 provinces, working alongside local counterparts to teach English, improve public health, and empower young people.

This year, in coordination with the Mongolian Ministries of Health and Education, Peace Corps Mongolia will introduce a new project that will promote public health by educating youth in the skills needed to lead healthy and productive lives.  This new initiative will further Peace Corps Mongolia’s longstanding tradition of building the bonds of friendship between our countries.

Our new Leaders Advancing Democracy, or LEAD, program will also deepen those bonds.    I am delighted that the first cohort of Mongolian participants is right now in the United States engaging in leadership and skills-building activities that will, among other things, help them establish “civic action plans” to address challenges facing Mongolia today.

U.S.-Mongolia relations have grown by leaps and bounds over the last 30 years.  Secretary Schultz felt in 1987 that the smooth negotiation of the establishment of U.S.-Mongolia diplomatic relations would serve as a “good omen for the future relationship between our two countries.”  Indeed it did.  And I am confident that our engagement with Mongolia will only grow stronger in the years to come.