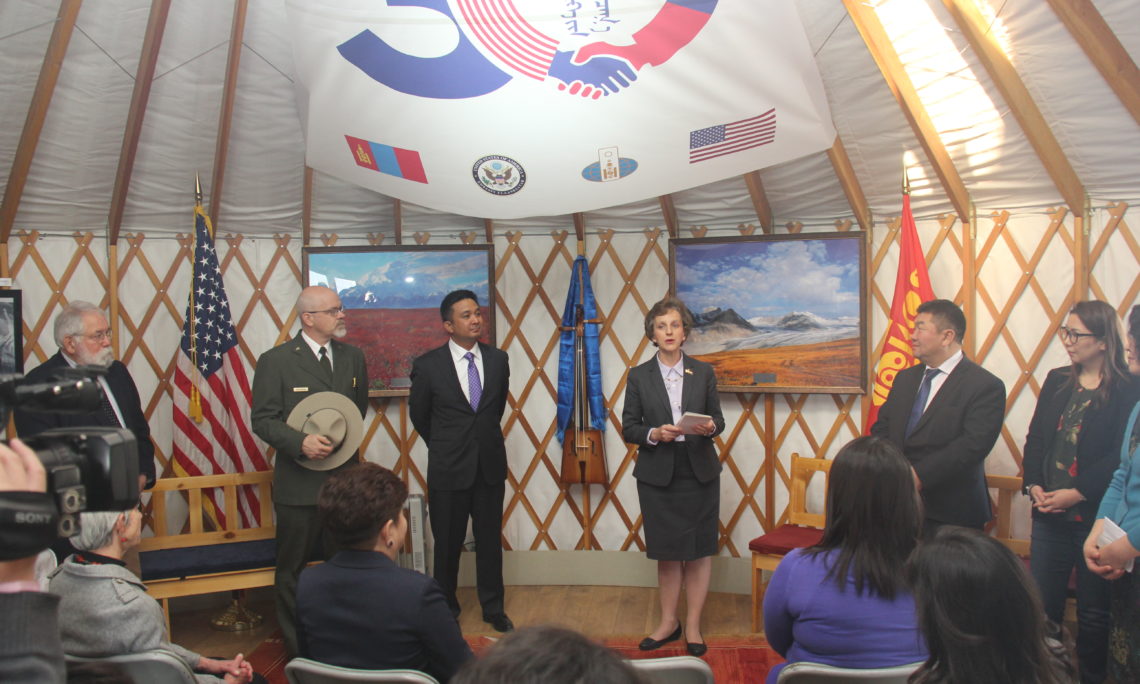 Thank you all for joining us for the naming of this innovative ger, which was inspired by Mongolia and made in America. We dedicated this ger in October to welcome our consular customers in a manner consistent with Mongolia’s traditions of hospitality and warmth – warmth sustained here in a literal sense by solar heating technology that demonstrates the U.S. commitment to protecting the environment and minimizing air pollution.

Last Friday, our two governments jointly celebrated the January 27, 1987 signing of the memorandum of understanding that established formal ties between the United States and Mongolia. The photographs in our ger show some of the highlights of the 30 years since that historic occasion. These photos and today’s naming ceremony are wonderful ways to celebrate three decades of partnership.

As part of our 30th anniversary celebrations, the Embassy held an internal competition to name the ger after U.S. and Mongolian national parks, consistent with the names of our Embassy’s meeting rooms. The selection committee chose the name “Altai-Denali,” honoring the national parks that encompass the highest peaks in Mongolia and the United States.

Altai Tavan Bogd National Park is home to Khuiten-Uul, Mongolia’s highest peak, and hosts rare animal species such as argali sheep, grey wolves, snow leopards, and golden eagles. The Altai Mountains have been an important crossroads for political, economic, and cultural exchanges in Mongolia and the region.

Occupying the heart of the U.S. state of Alaska, Denali National Park and Preserve boasts the highest peak in North America, Denali. The Alaskan city of Fairbanks has a sister city relationship with the Mongolian city of Erdenet, and Mongolia has a strong and enduring military partnership with the Alaska National Guard.

These ties make the name “Altai-Denali” especially appropriate. I would like to recognize the Embassy staff – DCM Manny Micaller, James Moffitt, Venera, and Zolboo – who were the inspiration for this wonderful name.

I hope it will inspire greater cooperation between our two countries to protect and conserve our national parks and protected areas for many years to come.