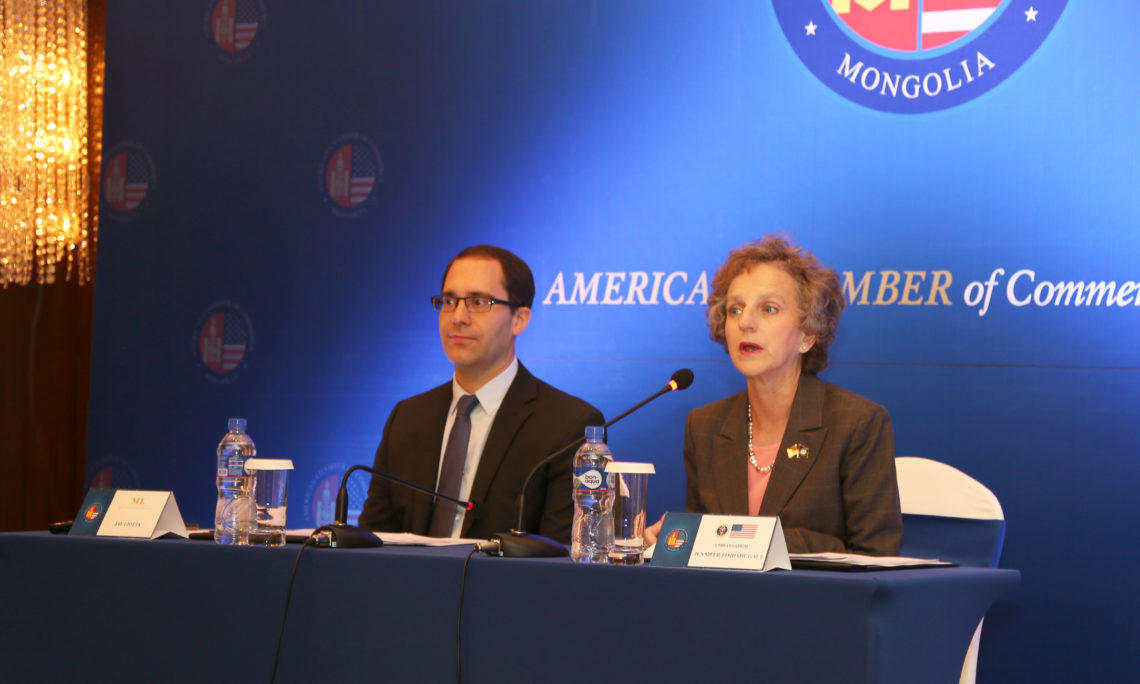 Chairman Liotta and members of the American Chamber of Commerce Mongolia, I appreciate this opportunity to present our 2017 Mongolia Investment Climate Statement.

Before I begin, I would like to congratulate AmCham on arranging an impressive trade delegation to Washington – the largest ever from Mongolia.

It was a privilege for me to co-lead the delegation with Foreign Minister Munkh-Orgil and to have the opportunity to join several of your meetings at the U.S. Chamber and across the U.S. government.

As everyone here knows, 2017 marks the 30th anniversary of the establishment of diplomatic relations between the United States and Mongolia.

My Embassy team and I are proud that this successful trade delegation is one of the highlights of our anniversary year.

Indeed, AmCham has proven yet again that you are an extraordinary partner to the U.S. Embassy.

I am confident that, working together, we will achieve the vision the Foreign Minister laid out during his Washington calls – for a stronger, more visible U.S. business presence in Mongolia.

Together, we will work with the Government of Mongolia to continue to improve the investment environment and encourage more U.S. businesses to explore opportunities in Mongolia.

Also before I begin, I would like to note that this presentation occurs just two days after what we now know was the first round of Mongolia’s process to elect a new president.

Whatever the outcome of the run-off election scheduled for July 9, I am confident the result will be another peaceful transfer of power, demonstrating one of the key findings in our Investment Climate Statement – that Mongolia is a politically stable democracy.

So, on to the Investment Climate Statement.

Along with our Country Commercial Guide, it is one of two economic and commercial documents that U.S. missions produce annually for U.S. investors and exporters.

The U.S. Embassy in Ulaanbaatar has been publishing the Investment Climate Statement since 2001.

It will be available on our Embassy website this Friday, following the State Department’s official release of all Investment Climate Statements on Thursday.

I will begin today’s rollout by explaining briefly how we produce the Investment Climate Statement and the important role the business community plays.

Next, I will discuss our key findings for 2017.

Finally, I will discuss specific steps we can take collectively to address some of the challenges identified in the Investment Climate Statement.

Let me start by saying that the annual Investment Climate Statement is an important component of the Department of State’s economic diplomacy.

These documents provide country and economy-specific information and assessments on investment-related laws and other important factors for doing business abroad.

Investment Climate Statements are designed to provide detailed information on the strengths and weaknesses, and recent trends, in 170 foreign markets; the information is  designed to assist U.S. companies to make informed investment and export decisions.

Of course, its use, ideally, should not be limited to U.S. companies.

The Investment Climate Statement is as comprehensive as we can make it – it assesses land ownership practices and use rights, intellectual property rights, and securities, among other factors.

The Investment Climate Statement explores the government’s role in securing these rights or, where appropriate, its failure to do so.

Finally, the Investment Climate Statement looks at the financial sector, the role of state-owned enterprises, local labor rules and markets, levels of corruption, and the incidences of political violence and violence against foreign investors.

The most important source of information for the Investment Climate Statement is you, local investors and businesspeople.

Whether you are from the United States, Mongolia, or another country, we depend on you to discuss, in confidence or in public, your knowledge and perceptions about what is happening in Mongolia that affects you.

We collect a year’s worth of views from thousands of meetings, documents, and events and distill them into what we hope is a coherent statement reflecting the past year and ramifications for the future.

Thus it is your views on the investment climate that largely shape our Investment Climate Statement.

If the business community perceives a law, a regulation, an action by parliament or the government to affect its activities in some way, then we report those perceptions.

This focus on business community concerns – on your concerns – is, in our view, the Investment Climate Statement’s greatest strength.

Finally, the Investment Climate Statement is an evolutionary document recording and responding to Mongolia’s changing commercial, economic, and political circumstances.

It reflects positive changes, such as improvements in Mongolia’s legal and regulatory transparency, and areas that Mongolia has not adequately addressed, including its inability to complete the privatization of state assets in the mining and finance sectors.

So where are we in 2017, and what are the key takeaways from the Investment Climate Statement?

To no one’s surprise, we face an investment climate in Mongolia that is turbulent but navigable for those approaching it with patience and caution.

We outline several reasons why there is a cause for optimism.

First, Mongolia has embarked on a comprehensive IMF program requiring the government to complete a wide range of reforms, with a particular focus on strengthening fiscal and borrowing practices.

In addition, the program requires banks to undergo an asset quality review, which is expected to improve commercial banks’ lending practices and portfolios.

While the full implementation of these measures may face political challenges, if fully adopted, they will lead to a more stable and predictable investment climate in Mongolia.

Third, we have seen improvements in legislative and regulatory transparency.

Mongolia completed aligning its process for drafting laws and regulations with its obligations under the U.S.-Mongolia Transparency Agreement, which entered into force on March 20.

We are working with the Mongolian government to implement these measures as quickly as possible.

Strong voices from both the international and the Mongolian business communities will make it clear to the government that businesses demand and value transparency.

The new Law on Arbitration has brought Mongolia into line with the UN Commission on International Trade Law rules on arbitration, and has created a system that may see the development of Mongolia as a destination for arbitration, if the law is implemented as intended.

The Investor Protection Council, under the Prime Minister, also promises some relief to investors seeking protection under the law.

Although the Council remains a work in progress, it aims to provide a venue to discuss problems affecting investors and the government before they become full-blown disputes requiring recourse to courts or arbitration.

2017 also saw the electronic movable property registration system come on line.  Pledges of receivables, certain use rights, cars, and other objects of value can now be officially registered.

Coupled with the immovable property registration system, creditors and borrowers now have a more secure basis to act on pledges of all types.

This innovation may lower the risks of borrowing and eventually interest rates.

These improvements are welcome, but investors and businesses have told us you are hoping for even more reforms.

For example, Mongolia’s foreclosure procedures should follow a more efficient and timely process for acting on pledges of movable and immovable property.

You also have told us that Mongolia should reform its bankruptcy processes to unwind insolvent businesses.

Although Mongolia establishes property rights of all types in its laws and constitution, you have also expressed concerns about expropriation of your rights.

You have reported that Mongolia has a good regime for protecting intellectual property rights, although some improvements are necessary, particularly in the area of software and digital piracy.

Those familiar with our efforts to develop a second Millennium Challenge compact are no doubt aware that the U.S. government is closely monitoring Mongolia’s fight against corruption.

Parliament approved its National Plan to Combat Corruption in November 2016.

While the Investment Climate Statement does not capture the government’s actions in 2017 to implement this plan, we are aware of meaningful steps undertaken by the Independent Authority Against Corruption and other government entities to combat corruption.

However, effective anti-corruption efforts require concerted support from the public and the business community to create lasting change.

These are the key takeaways from the 2017 Investment Climate Statement, but there is plenty more in the document; we hope you will find something relevant and valuable to your particular situation in its 31 pages.

For us, the Investment Climate Statement’s value comes not only from what it tells us about your situations but also how it helps us deploy our resources for enhancing the investment climate.

Through the Investment Climate Statement the Embassy draws attention to particular problems in the investment environment.

We then look to see where we have comparative advantages to help resolve issues, whether it be advocating certain policies, convening the right parties, or bringing in technical expertise.

The 2017 Investment Climate Statement has directed us to focus on several obvious and not so obvious challenges.

First, the IMF agreement is slated to run for three years and will affect the investment climate for all of those years and likely beyond.

The Embassy will be focusing on the implementation of the reforms inherent in the IMF package and will seek every reasonable opportunity to involve the business community in outreach activities with the government and Parliament.

Mongolia has the legislative and regulatory instruments to make it a global leader in transparency.

However, most people, including many working in the private sector, lack knowledge of how to use these instruments to ensure that laws, regulations, and administrative acts are transparently enacted and executed.

We believe the U.S.-Mongolia Transparency Agreement will greatly benefit Mongolia and enforce transparency, and hope the Mongolian government begins implementing the procedures in its law.

In the meantime, however, the Mongolian government already has several transparency elements working under the existing law.

For example, the law on public hearings requires public outreach for new laws and regulations as well as a requirement to solicit public comments.

Companies playing a positive, meaningful role in the legislative process would make strong contributions to improving the investment climate.

We will be convening meetings with AmCham, other business groups, and government of Mongolia representatives to explain how to use existing laws to ensure transparency.

AmCham and the Embassy have a very productive partnership protecting and promoting U.S. intellectual property rights; the Investment Climate Statement points to areas where improvements are possible and necessary, especially in the areas of software and digital media piracy.

Investors the world over are seeking a stable legal environment; Mongolia is no exception.

As Mongolian laws improve and Mongolian institutions build capacity, an effective Investor Protection Council would serve to provide confidence to investors that they will be operating in a favorable environment.

So the 2017 Investment Climate Statement provides the business community and the Embassy with an ambitious but realistic agenda for 2017 and beyond.

We have already begun outreach to the business community, the government, and the Parliament.

A clear, transparent, and predictable legal and regulatory framework is the critical first step toward making Mongolia an attractive and competitive investment destination.

It is vital that this framework be developed through close consultation among the government, the private sector, and other stakeholders.

The dynamic private sector must then seize these opportunities.

Thank you for the opportunity to introduce our latest Investment Climate Statement to you.

I urge you to read it for information useful to your situation.

I further urge us to continue the kind of conversation we’re having today.

My economic team, John McDaniel and Michael Richmond, and I would be pleased to answer any questions you might have.