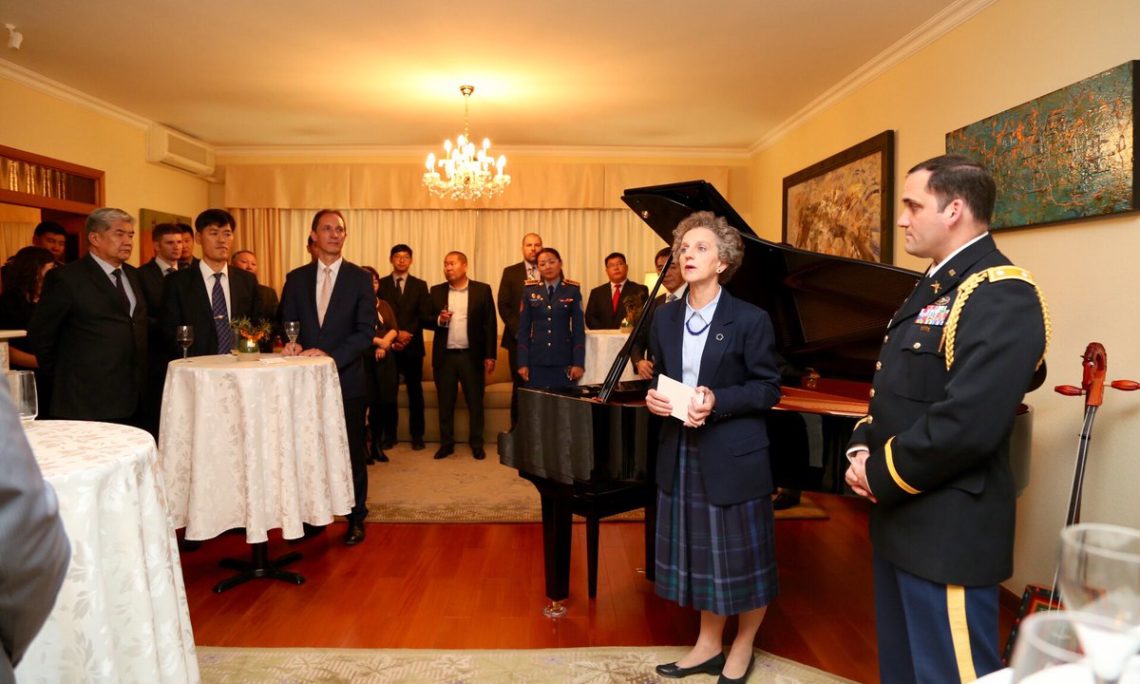 It is my distinct pleasure to host everyone here to officially introduce and welcome to Mongolia our new Senior Defense Official and Defense Attaché, Lieutenant Colonel Mike
Dorschner.

While LTC Dorschner arrived in August, and has likely already met some of you over the past few weeks, tonight’s gathering is to ensure everyone is properly introduced to this important member of my team.

A little bit of background on your new colleague: LTC Dorschner was born and raised in Boston, MA, and is a graduate of the United States Military Academy at West Point.

Upon joining the Army, he originally commissioned as an Armor Officer and served in several tank units, to include operational deployments to Kosovo and Iraq.

He later became a Foreign Area Officer, a specialty he has now served in for almost a decade.

He previously managed security cooperation from U.S. Pacific Command in Hawaii and served at the U.S. Embassy in Beijing; he comes to us directly from working the past couple years at the U.S. Consulate General in Hong Kong.

The Defense Attaché is a critically important member of my team.

LTC Dorschner serves as both my senior military advisor and as the designated representative of our Secretary of Defense, the Chairman of our Joint Chiefs of Staff, and the Commander of U.S. Pacific Command; he will also serve as our key facilitator
for our ongoing efforts to support, strengthen, and deepen the United States’ military cooperation with Mongolia.

Our celebrations this year of the 30 th anniversary of U.S.- Mongolia diplomatic relations are an opportunity to highlight the breadth and depth of U.S.-Mongolia cooperation – our
robust military partnership is one of the key pillars of our bilateral relationship.

Mongolia’s continued professional commitment to global peacekeeping and support to allied contingency operations sets the platinum standard for U.S. allies and partners – we are proud to serve alongside our Mongolian counterparts.

I have tasked LTC Dorschner to build on the relationships and mutually beneficial programs developed by his outstanding predecessors to further expand the U.S.-Mongolia military
partnership.

To be successful in this task, he will need the support and cooperation of everyone in this room.

I am pleased to see so many of our like-minded friends here tonight because I know we share a common goal of supporting Mongolia’s continued political and economic sovereignty.

I ask that you work with LTC Dorschner, and together, continue to strengthen our bilateral and multilateral relationships.

Thank you all very much.