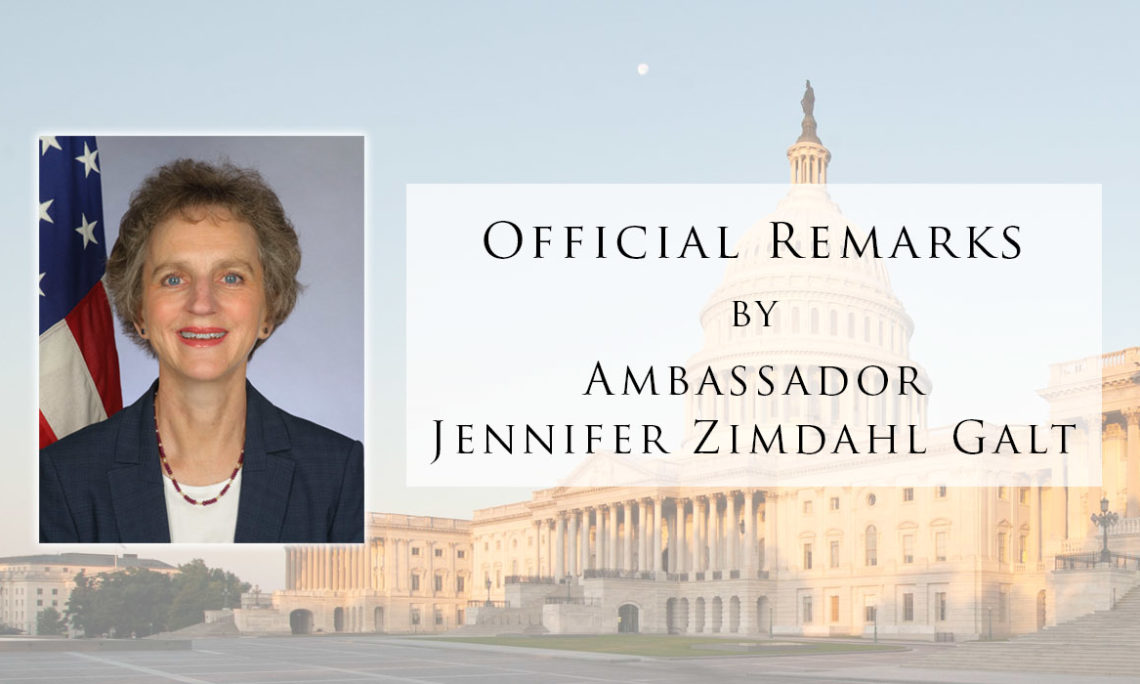 AMBASSADOR GALT: Good morning, good afternoon, and good evening to those of you who are joining this Direct Line Webinar:  Promoting U.S. Higher Education to Mongolian Students.

I also have with me key members of my Team, Economics Section Chief John McDaniel and Senior Commercial Specialist Michael Richmond.

This is the latest in a series of Mongolia Direct Line Presentations exploring U.S. export opportunities in Mongolia.

I’d like to thank the Direct Line DC team for their steadfast support of these webinars which are a terrific platform for me to speak directly with U.S. companies without any of us having to leave our offices.

After I deliver my general overview on the Mongolian student market and opportunities for U.S. higher education institutions, Mr. Badruun and Mr. Batjin will give more detailed presentations on what Mongolian students are looking for and how you should approach them.

We will devote the remaining time to your questions.

Before I begin, I would like to remind everyone that detailed information on Mongolia’s business environment can be found in our 2017 Mongolia Country Commercial Guide and 2017 Investment Climate Statement, both of which are available on our Embassy website.

I will start by offering a general picture of how the U.S. Embassy engages with young Mongolians and give a broad brush picture of the typical student.

I will then briefly discuss the current state of the Mongolian economy and its impact on the desire of students to study in the United States, and close with specific ways the U.S. Embassy in Mongolia would be pleased to work with you to promote U.S. higher education to Mongolian students.

Promoting people-to-people exchanges through education is among the best ways to promote better relations between nations – indeed these exchanges help build mutual understanding between our two societies which in turn contributes to an overall positive bilateral relationship between our two countries.

Since its opening almost 30 years ago, the U.S. Embassy in Mongolia has actively promoted U.S. education to Mongolian students.

We have a vibrant Fulbright program which sends 13-15 students to the United States and brings American students, researchers and lecturers to Mongolia each year.

As Ambassador, I have made youth outreach a priority and have had the privilege of engaging with young Mongolians, who make up more than 60 percent of the population, across this vast country.

Last year, we launched LEAD – Leaders Advancing Democracy – to help build the next generation of democratic leaders for Mongolia.

The aim of LEAD is to empower young Mongolians from different sectors to lead by promoting civic education, encouraging citizen engagement, and providing meaningful U.S. exchanges.

The second cohort of LEAD Fellows is preparing to travel to the United States in September.

In 30 years of U.S.-Mongolia diplomatic relations, many Mongolians who have studied in the United States have risen to become successful public officials, business people, and leaders of civil society.

In fact, the alumni network of Mongolians who have studied or participated in an exchange program in the U.S. has over 2,000 members and is a force for positive change in Mongolian society.

Mr. Batjin, an alum of Williams College, and Mr. Badruun, a Stanford alum, are shining examples of the benefits of a U.S. education.

There is also a commercial dimension to getting a U.S. education.

One of my goals as Ambassador is to broaden and deepen the U.S.-Mongolia commercial relationship, and education is among the sectors we have identified as having significant potential.

The U.S. Department of Commerce reports that each foreign student in the United States spends a minimum of $31,000 a year to receive a U.S. higher level education.

Our consular section reports that at any given time, over 2,000 Mongolian nationals are studying in the United States contributing $62 million annually to the U.S. economy.

To put that number in perspective, Mongolia has three million people but on a per capita basis, Mongolia sends more students to the United States than almost any other country.

If you consider the economic challenges Mongolia has faced over the last four years, these numbers take on even greater significance.

Four years of ongoing stagnation in global commodities markets and policy missteps by the Government of Mongolia have contributed to an economic downturn and fiscal crisis limiting incomes and opportunities.

This has caused many Mongolians to look outside their country for new prospects.

Despite several years of low economic growth, thousands of Mongolian students have found the resources to travel to the United States for an education.

The recently agreed IMF program has helped stabilize the economy, but job creation is still lagging.

So who is the typical Mongolian student?  What is he or she looking for?

There is no particular focus of study:  Business and law are the leading areas of study, but engineering, health, agriculture, humanities are also fields of interest.

These figures give you a snap shot of the potential Mongolian student, a picture that our two speakers will flesh out for you.

While I don’t want to steal our experts’ thunder, it is no surprise that the greatest challenge for the average Mongolian student is paying for an overseas education.

Schools that show some ingenuity and flexibility in this regard are likely to be more successful in their recruitment efforts.

To help you, EducationUSA and my economic team have prepared a contact list of Mongolian education agencies that you might work with to recruit Mongolian students.

We will provide you with that list after this presentation.

While I am always delighted to talk about the benefits of U.S. higher education, I would be remiss if I didn’t also mention some challenges.

Unfortunately, there are too many people from across the world, including Mongolia, misusing student visas to live and work illegally in the United States.

These negative examples make it more difficult for other applicants to qualify for U.S. visas

U.S. immigration law requires student visa applicants to prove that they are serious and prepared to study.

If the applicant is unable to do so, evidence shows that there is a high risk the applicant will fall out of student status in the United States, and pursue illegal work instead.

In those instances, my consular officers must follow the law and refuse the application.

If more young Mongolians study successfully in the United States and follow U.S. immigration law, they can showcase that Mongolian students are excellent candidates for student visas, helping more of their fellow citizens to gain the same opportunity.

With that, I would like to turn the floor over to Mr. Badruun and Mr. Batjin, who will discuss what Mongolian students seek in a U.S. education and how you might go about recruiting them.

Thank you and I look forward to your questions.