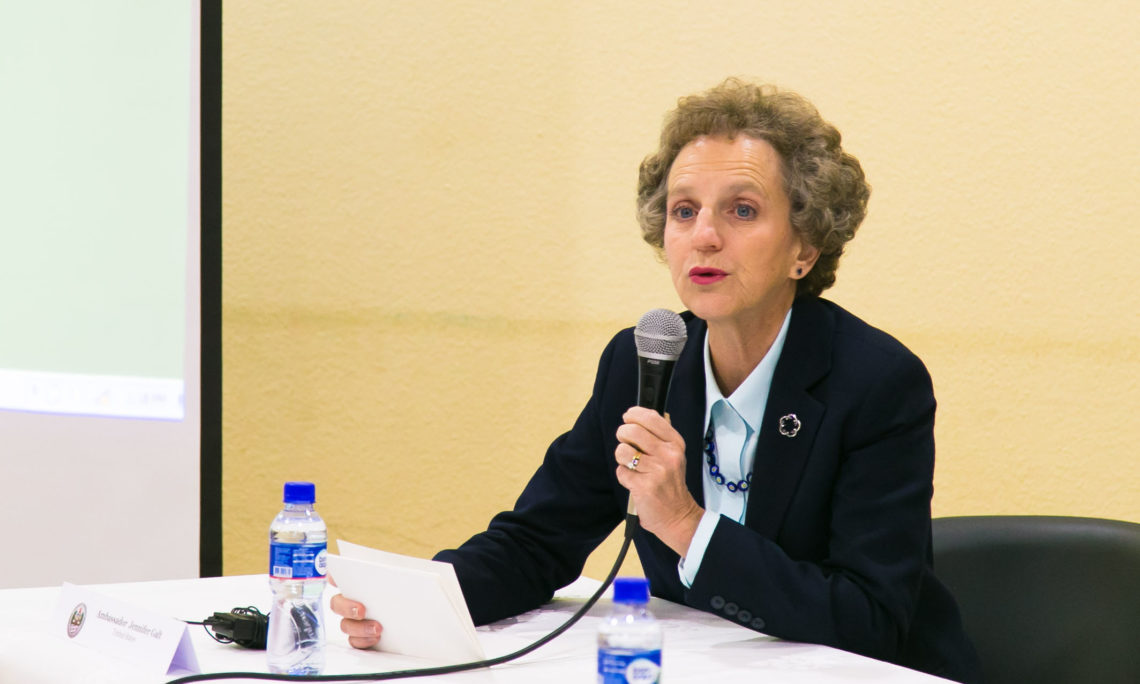 AMBASSADOR GALT: A warm welcome to alumni of the George C. Marshall Center and to all of tonight’s distinguished guests.

I’m pleased to be co-hosting tonight’s reception with Marc Johnson of the Marshall Center Alumni Office.

I am the first of many speakers this evening, so I will keep my remarks brief.

In keeping with the Marshall Center tradition to address issues directly and respectfully, I would like to touch on two topics – the important impact of the Marshall Center in Mongolia and a pressing global security matter, the continued threat posed by the Democratic People’s Republic of Korea, or DPRK.

The George C. Marshall Center acts as a stabilizing force throughout Europe and Eurasia.

By inviting Mongolians to attend courses, the center expands its reach into the Asia-Pacific region, and both Mongolia and the Marshall Center are better for it.

I’m pleased to note that Mongolia has 177 Marshall Center alumni, a number that grows each year.

One of the skills practiced in the Marshall Center is frank and open discussion.

Last year in this forum some of you spoke openly about Mongolia’s top security concerns.

From a U.S. Government perspective, I regret that we have seen little movement on the part of the government of Mongolia toward resolving these challenges.

Some threats, such as that posed by the DPRK, have significantly worsened in the last 18 months as we’ve witnessed the DPRK’s increasingly provocative behavior that threatens the security of every country across the Asia Pacific, including the United States and Mongolia.

As President Trump stated last week at the United Nations General Assembly, “it is time for North Korea to realize that denuclearization is its only acceptable future.”

Every country with a stake in international peace, stability, and prosperity must take action to show Kim Jong Un that the international community will not accept a nuclearized North Korea.

Pyongyang’s actions have no precedent and as such, warrant an unprecedented response.

The DPRK’s continued development of nuclear weapons represents an unacceptable threat to the United States and international peace and security.

We ask that all countries take action to put diplomatic and economic pressure on the regime to persuade Kim Jong Un that he needs to reconsider the path he is currently on and think about engaging in meaningful dialogue about a different future.

We ask that Mongolia cut or suspend any and all economic ties between your country and the DPRK and immediately end the DPRK worker program.

We also ask all countries, including Mongolia, to sever or significantly reduce diplomatic ties and bring diplomatic representation to levels appropriate for North Korea’s continued flouting of international obligations and commitments.

These strong statements and requests of the government of Mongolia should come as no surprise, as I have been continuously advancing these objectives as U.S. Ambassador.

Mongolia has heard similar requests from its other third neighbors, including Australia, Japan, the Republic of Korea, Canada, the UK, Germany, France and the EU, to name only a few.

What is new is the nature of the threat from North Korea and the urgency of the United States to counter it.

UN Security Council resolution 2375 contains strong provisions to put pressure on Pyongyang and sends a very clear message to North Korea that the international community is united in condemning and demanding North Korea give up its unlawful nuclear and ballistic missile programs.

The United States has the unquestionable ability to defend itself and its allies.

As we and others have stressed, we will never accept a nuclear-armed North Korea.

As the President has articulated, all options remain on the table.

However, our preferred approach is to resolve the situation diplomatically – in short, the global pressure campaign is the peaceful option.

Thank you for your attention.  I look forward to the evening’s other speakers.