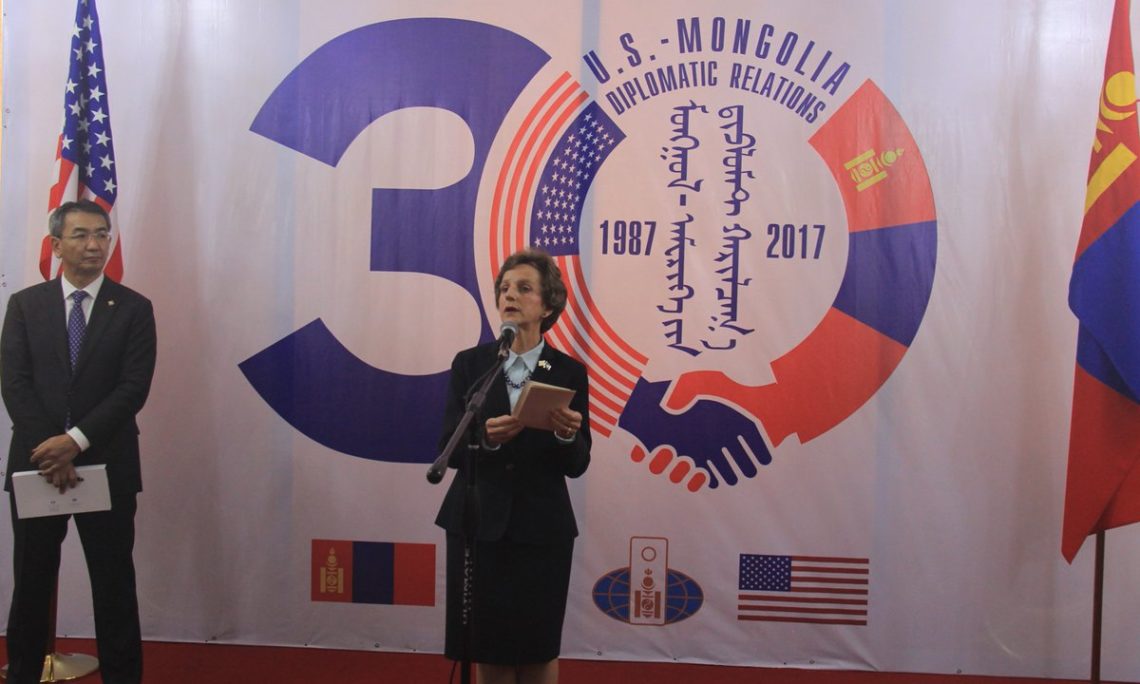 I am delighted to be here with Foreign Minister Munkh-Orgil to mark the 30th anniversary of the establishment of U.S.-Mongolia diplomatic relations – and thank you for a copy of this wonderful calendar!

Our formal diplomatic partnership began 30 years ago today with the signing of a joint communiqué between the United States and Mongolia.  A little more than a year later, the United States opened its first embassy in Mongolia, and the first resident United States Ambassador arrived in 1990.

The first years of our bilateral relationship were marked by Mongolia’s landmark “decision for democracy” and its transition to a free-market economy.  Historic visits followed, accompanied by the signing of landmark agreements such as the memorandum establishing the Peace Corps in Mongolia.  Over time, our bilateral relationship has grown into a robust partnership spanning political, economic, and defense issues and encompassing deep cultural and people-to-people ties.

Today, the United States and Mongolia work together to advance democratic ideals in the UN and other international organizations; partner to spur economic growth and strengthen our bilateral trade ties, including through our newly signed bilateral Transparency Agreement, which will enter into force on March 20; contribute jointly to peacekeeping and coalition operations in some of the world’s toughest places,

including South Sudan and Afghanistan; and cooperate to expand mutually beneficial exchange programs.

In fact, I am pleased to announce that beginning later this year Mongolia will join the Future Leaders Exchange (FLEX) Program, which brings top high school students from many countries to the United States for a year of study at U.S. high schools.  We are thrilled to add Mongolia to this program during this 30th anniversary year.

Throughout our relationship, the United States has backed initiatives to advance human rights, combat domestic violence, halt child labor and trafficking in persons, empower women and girls, and improve health and education.  We have sought to spur economic growth and reduce poverty, increase access to energy, and fight air pollution.

We have worked to build military capabilities, enhance peacekeeping capacity, and strengthen disaster response and humanitarian assistance efforts.  And we have expanded two-way academic and cultural exchanges.

Many of the milestones in our three decades of positive, friendly relations are illustrated in the photo exhibit in this room, jointly prepared by the U.S. Embassy and the Mongolian Ministry of Foreign Affairs.  Still more are depicted in a commemorative photo book that we plan to publish in the very near future, also in collaboration with the Ministry.  The photos make clear the depth of the mutual understanding, respect, and cooperation that have defined U.S.-Mongolia relations over the last 30 years and form the foundation on which we anticipate building cooperation for many years to come.

Indeed, the United States remains committed to expanding our bilateral relationship with Mongolia – a partner that we value for its commitment to democracy, economic opportunity, and regional and global peace and security.

The United States is proud to have been Mongolia’s “third neighbor” for the last 30 years.  We may be distant from one another geographically, but in terms of our values and aspirations, we are exceptionally close.  I am confident that we will only grow closer in the decades to come.