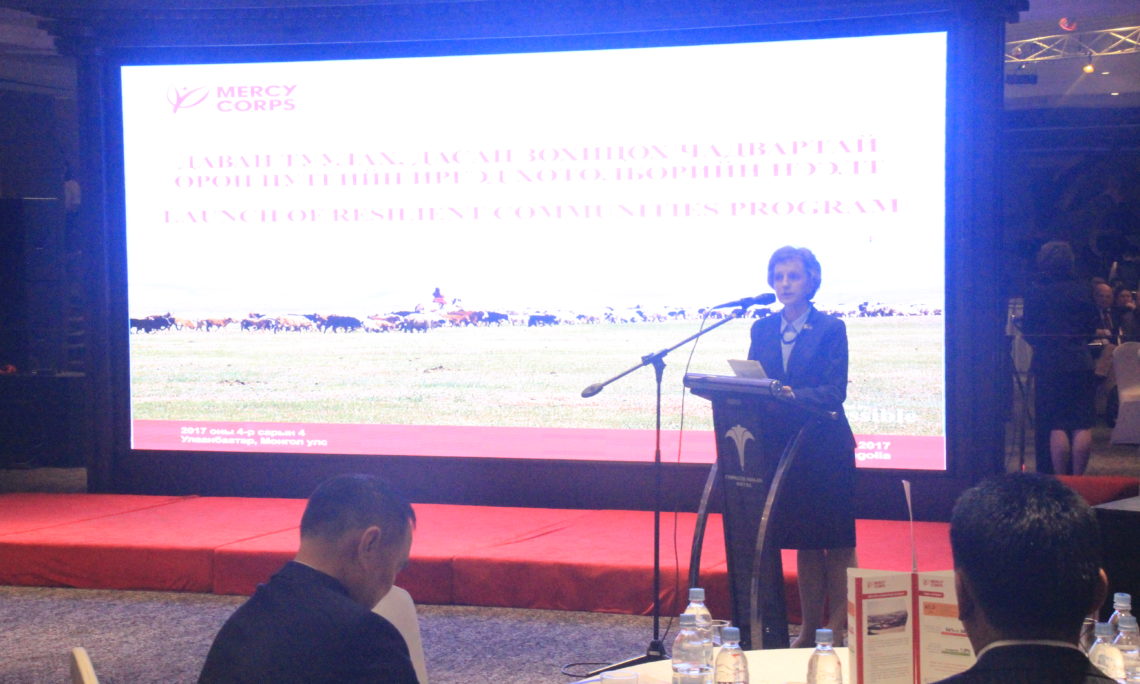 It is a pleasure to participate in the launch of Mercy Corps’ new economic development program focused on building a competitive meat export sector.

I have been excited about this project since my arrival in Ulaanbaatar a little over a year and a half ago.

The genesis of this project dates back to the 1990s when the United States Agency for International Development and Department of Agriculture invested in a microfinance project managed by Mercy Corps International.

Today’s launch demonstrates the U.S. Government’s sustained commitment to supporting Mongolia’s economic development – and in particular to achieving a goal we share with the Government of Mongolia – creating value-added export opportunities in the agricultural sector.

Earlier this year, I was pleased to join Minister of Agriculture and Light Industry Sergelin and Mercy Corps Vice President Redmond in signing a Memorandum of Understanding outlining the primary focus of this project – to develop Mongolia’s livestock sector with the aim of increasing meat exports, particularly beef.

We chose to focus on this important and promising sector in response to the Government of Mongolia’s National Action Plan which identifies the development of the agricultural sector and exports as top priorities.

Agriculture, particularly livestock, has long been a mainstay of Mongolia’s economy, both as a source of revenue and of employment.

The Mercy Corps program we are launching today directly addresses ongoing challenges in the agricultural sector – preventing and treating transboundary animal diseases, bringing Mongolia’s sanitary and phytosanitary standards up to world standards, adding value to Mongolian meat exports, increasing processing of those exports, and mitigating the impact of Mongolia’s harsh winters on livestock and the deleterious impact of the ever-increasing number of animals on Mongolia’s fragile pastureland.

The United States government has pledged over $10 million over four years to meeting these objectives, and with the strong commitment of the Mongolian Government, I am confident we will succeed.

Working together with the private sector, the donor community, and other stakeholders, Mongolia can meet these challenges and realize the tremendous untapped opportunities in its livestock sector.

The U.S. Government intends to be a full partner in this project as part of our ongoing commitment to Mongolia’s sustainable economic development.

To complement this project, the U.S. Department of Agriculture’s Animal and Plant Health Inspection Service – APHIS – is working with the Ministry of Food, Agriculture, and Light Industry and the General Agency for Specialized Inspection to enhance veterinary capacity and better respond to transboundary animal disease.

In addition, the U.S. Export/Import Bank, the Overseas Private Investment Corporation, and the Trade and Development Agency are looking for opportunities for U.S. investment and trade in the hay farming and livestock sectors.

Value-added meat exports have the potential to bring tremendous benefits to Mongolia in economic diversification, job creation, economic growth, and quality of life – and any one of these benefits far outweighs the challenges the agricultural sector is currently experiencing.

Meeting the challenges in the agricultural sector and realizing the potential for Mongolian meat exports is not a pipe dream.

In fact, one need only look next door to Kazakhstan for a successful model.

In 2009, Kazakhstan’s beef sector was very similar to Mongolia’s today.

With strong support from the Kazakh government, a U.S. company partnered with a Kazakh company to invest in the cattle sector.

There is no reason Mongolia cannot achieve that same distinction.

We are pleased to partner with the Government of Mongolia and Mercy Corps in this exciting undertaking.

Economic engagement is one of my highest priorities as United States Ambassador, and I am particularly proud to launch this Mercy Corps project during the 30th anniversary year of U.S.-Mongolia diplomatic relations.

I am fully committed to this partnership and look forward to seeing Mongolia become an international player in the global meat industry.

Thank you very much.