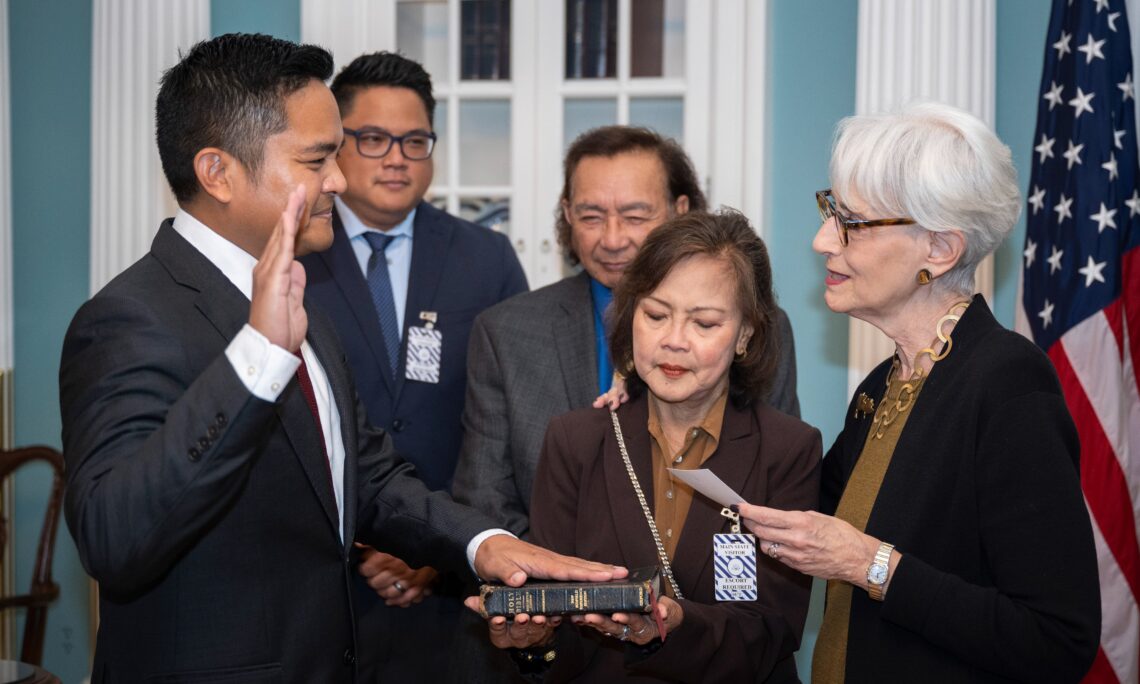 I was born in San Diego.  My father was in the Navy, he was assigned there on a tour and met my mother there.  San Diego has a number of differences from Ulaanbaatar, particularly the climate.  However, there are a lot of similarities between the people; San Diego, like Mongolia, has a generally very friendly population, people are laid back, everyone is always doing something outdoors, there’s a real love of the outdoors.  Also, the cities of San Diego and Ulaanbaatar are roughly similar in population size.

As I mentioned, my father was in the U.S. Navy.  He grew up in the Philippines but admired the United States, a country he had never visited, and dreamed of joining the Navy.  Meanwhile, my mother was an accountant who came to the United States with nothing more than her accounting degree and a small suitcase.  I often think of my parent’s story and how its leap of faith personifies what many, including a number of Mongolian immigrants, go through when coming to the United States.

Introduce Your Siblings and Childhood

My childhood was very nomadic.  I grew up with my father moving around from place to place in the United States because of his military assignments.  While I was born in San Diego, I spent a lot of my childhood in Hawaii and consider that my second childhood home.

I have one sibling, a brother who is only two years younger than me.  He actually flew out to Washington, D.C. for my swearing in as Ambassador.  We spent a lot of time in the outdoors growing up.  In Hawaii, I remember the small Filipino community in Waipahu, we were very tight knit. Neighbors were not shy to treat me like their own child.  My family is my bedrock and I would not be where I am today without their love, support, and encouragement.

I have some musical hobbies, like playing the piano and ukulele.  However, I’m really passionate about reading and love learning about the culture, language, and history of other countries.  I read a lot, especially history books.  I’m usually a non-fiction, history reader.  Earnest Hemingway, John Steinbeck, they’re probably my favorite authors.  I’ll read their books over and over again.  Joseph Campbell is another author I love reading, he really examined the structure behind our stories and our heroes.  And, of course, I’ve read Jack Weatherford.

In fact, I have two copies of Jack Weatherford’s book, “Genghis Khan and the Making of the Modern World” but only recently realized it.  When I learned I was nominated to be U.S. Ambassador to Mongolia, I immediately got a copy of the book only to find out I already had a copy that was given to me as a gift when I visited Mongolia in 2012, when I was the Director of Digital Engagement and traveling with the Assistant Secretary for the Bureau of Global Public Affairs.

As an adult, being outdoors is still really important to me, so I do like to get out and golf.  I was not much of an athlete growing up, but I did play little league baseball.  It may have contributed to my love of the Padres, and I am a true fan because San Diego may not have a lot of sports teams, but they do have a baseball team.  I’m proud of San Diego as my home town, so I root for my sports teams.

I like classical music and I’m a big fan of Elvis.  I also really love opera, particularly Mozart, Wagner, and Verdi’s works.  One of my first cultural events here in Mongolia was going to the State Academic Theatre of Opera and Ballet and seeing “Tosca.”  My favorite opera is “Tristan und Isolde,” which shares a number of themes with Romeo and Juliet.

For what in your life do you feel most grateful?

My family and friends.  As I said, my family is my bedrock and I would not be where I am today without their love, support, and encouragement.  Same is true for my friends.

How would you describe the Mongolian people you’ve met so far?

I have been amazed at how friendly, patient, and open the Mongolian people are.  I really feel welcome here in Mongolia already.

What does being a diplomat mean to you?

To me, being a diplomat means being able to represent my country in foreign places, to find ways where we can achieve common ground.  Successful diplomats learn from other cultures, countries, and societies.  We also help America also understand its role in the world.

Since Mongolia is in the Bureau of East Asian and Public Affairs, my most memorable moment in the bureau was arriving here.  That first day, coming into the airport, I had never felt so much anticipation.

What are your three main goals / priorities as the U.S. Ambassador in Mongolia?

As U.S. Ambassador to Mongolia, my priorities are building and enhancing our people-to-people, democratic, and economic ties.  My colleagues and I will partner with you to keep Mongolia’s democracy strong and your economy resilient.  In the last few decades, Mongolia has been a steady partner committed to human rights and rule of law, while fostering a strong and vibrant civil society and free press.  I also look forward to strengthening our defense relationship so Mongolia can continue to play a global role in UN peacekeeping, and humanitarian and disaster relief.  Our two countries have a close and enduring relationship; a relationship of friendship and partnership, where we stand shoulder-to-shoulder with you to safeguard freedom, prosperity, and bright futures for both our countries.

If you could wake up tomorrow having gained any one quality or ability, what would it be?

What is the greatest accomplishment of your life (so far)?

To be the U.S. Ambassador in Mongolia.

How do you hope to be remembered when you leave Mongolia?

I want Mongolians to think of me, and of Americans in general, as a good person and genuine partner and friend.