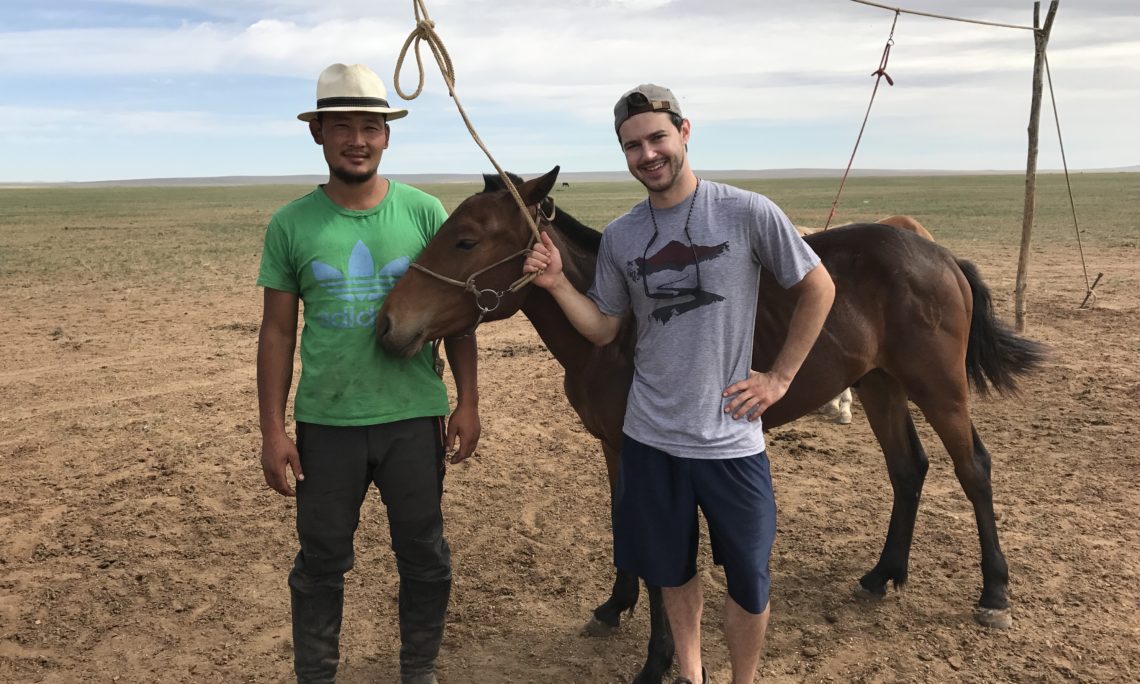 This month Embassy Ulaanbaatar’s Public Affairs Section (PAS) success story is about one of our program alumni named Peter Bittner.  Peter is a rare individual whose dedication to Mongolia has seen him return to this country repeatedly and in various capacities over the past few years, and whose efforts in various fields such as journalism, education, capacity building, and intercultural study seem to embody the type of ongoing U.S.-Mongolian friendship and cooperation that has keep the Mongolia-U.S. bilateral relationship strong and robust over these past 30 years.

Peter first came to Mongolia in 2011 while an undergraduate on a study tour of nine East Asian countries that included Mongolia.  He spent one month in Mongolia at that time, studying Buddhism at Lam Rim Monastery in Ulaanbaatar.  While the month flew by very quickly, it sparked an ongoing interest in Mongolia for Peter, and he has returned six times since that initial visit.

Mr. Bittner returned to Tacoma, Washington to continue his studies at the University of Puget Sound after his initial trip, but was determined to return to Mongolia as soon as possible.  After graduating in 2012, Peter returned to Mongolia with the Fulbright English Teaching Assistantship (ETA), a program managed by Embassy Ulaanbaatar. Through the ETA program, he spent one academic year co-teaching classes with a Mongolian counterpart at the Rajiv Gandhi Polytechnic College of Production and Art in Ulaanbaatar.  He also spent some of his free time organizing workshops for young women on life skills development with the Caritas international development organization in the Chingeltei and Songinokhairkhan districts of UB.

It was at that time, and through his interaction with local staff at Embassy PAS that Peter learned about the annual Alumni Engagement Innovation Fund (AEIF) through which groups of alumni of American exchange programs (e.g. Fulbright, FLEX, Humphrey, Global Undergrad, etc.) and their advisors are able to submit community development project of up to $25,000.  Mr. Bittner joined a team of Mongolian alumni headed by Mrs. Gandolgor Purevjav of the Ganabell Institute who were able to obtain a grant for $20,000 through the AEIF for conducting workshops on women’s empowerment, including SME entrepreneurship and personal financial management.  This project focused on women living in the outlying “ger districts” of Ulaanbaatar.  Ger Districts are sprawling, unplanned squatter settlements that have little access to modern amenities such as regular electricity or running water, and are populated mainly by rural immigrants to the capital.

In the summer of 2016 Mr. Bittner returned to Mongolia, now as a graduate student at UC Berkeley Graduate School of Journalism.  He was doing a reporting internship for The Diplomat, a foreign affairs journal, and was able to write about the 2016 parliamentary election, the big Asia Europe Meeting (ASEM) among other topics of interest.

Peter is now in Mongolia again for the summer, and working with the Ger Community Mapping Center (GCMC) via a Human Rights Fellowship with UC Berkeley School of Law.  GCMC is a small NGO run by Batdorj Gongor and Enkhtungalag Chulunbaatar, and dedicated to improving the lives of ger district residents “through community engagement and participatory decision-making” (http://www.germapcenter.org/about.html ) on health, education, infrastructure, and resource use issues.  Peter is working on a drone-based air pollution mapping project with GCMC for Ulaanbaatar, “City of Smoke,” which will also serve as his Masters in Journalism thesis project. He also is assisting GCMC with capacity-building work for production of community outreach videos and use of drone technology more generally to enhance their mapping capabilities.  Another of his projects with GCMC is a five-minute video product on “climate migrants” that will involve interviews with herders and herding families in and around the city of Tsetserleg in Arkhangai aimag.

Mr. Bittner is also an American Center for Mongolia Studies (ACMS) Language Fellow this summer and seeks to improve his skills in the Mongolian language. We wish him luck and the best of success for his future efforts in Mongolia and beyond.