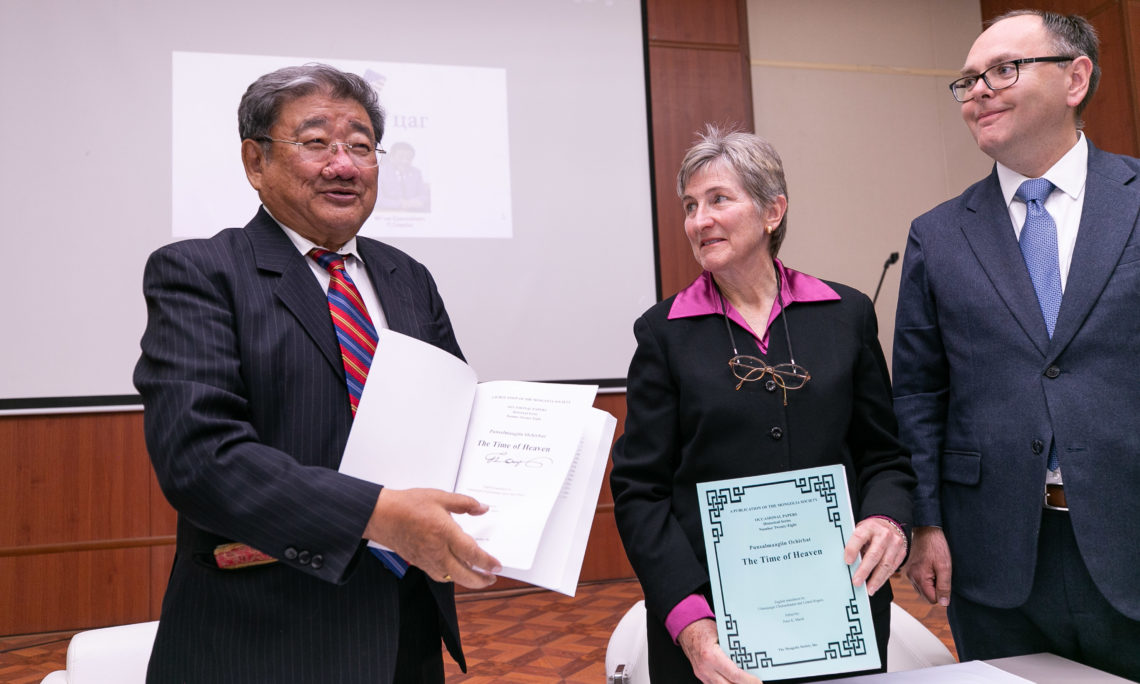 Ambassador Pamela Slutz (Mongolia, 2003-2006) and President Punsalmaagiin Ochirbat (retired) jointly launched the English language version of “The Time of Heaven,” President Ochirbat’s official memoir, on October 4 at the U.S.-Embassy funded American Corner in Ulaanbaatar. The American Corner is hosted by the Ulaanbaatar City Public Library. Published by the Mongolia Society, and with translations by Ms. Udaanjargal Chuluunbaatar and Mr. Leland Rogers, “The Time of Heaven” traces P. Ochirbat’s path from the rural Mongolian countryside to the highest political office in the country, and explores the complex issues of democracy, the legacy of Socialism, citizenship, ethics, and the responsibilities of a government to its people.

After some opening remarks about the book by President Ochirbat and Ambassador Slutz, and some questions and comments about its content and the importance of memorializing Mongolia’s path to democracy, two copies of the book were signed by both guests of honor and presented to Ms. D. Indra, Ulaanbaatar City Public Library Director, and Mr. Rob Tate of the U.S. Embassy, respectively.  Some of the dignitaries who attended this event included: former Mongolian Ambassadors to the United States B. Altangerel and Kh. Bekhbat; the current Mongolian Ambassador to the United States Yo. Otgonbayar; former Foreign Minister L. Erdenechuluun; former Prime Ministers M. Enkhsaikhan, R. Amarjargal, and S. Bayar; and former Finance Minister P. Tsagaan.

There were roughly 70 people in attendance at the book launch, and it was covered by national broadcast networks such as MNB TV and the Voice of Mongolia.