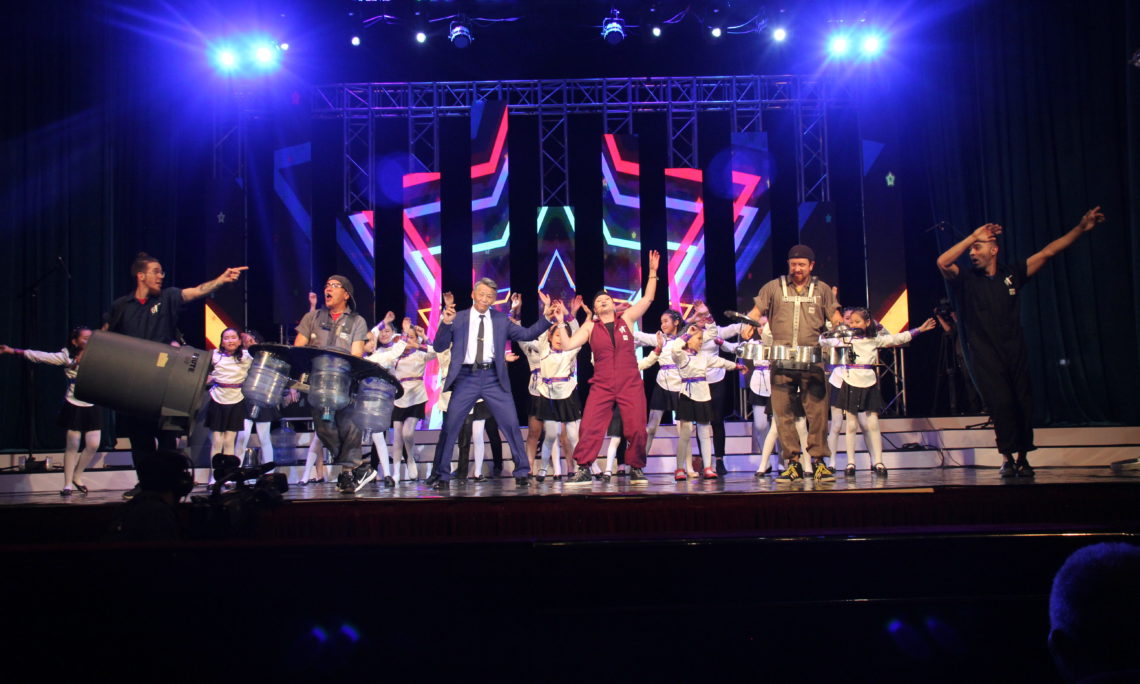 Texas-based musical environmentalists “Vocal Trash” visited Mongolia as U.S. Arts Envoys April 25-May 2, 2017.  Their visit was among a series of U.S. Embassy-sponsored events celebrating Earth Day and was also among many events in 2017 commemorating the 30th anniversary of the establishment of U.S.-Mongolia diplomatic relations.

The highlight of the band’s visit was their joint performance on April 27 with “Egshiglent Chimee,” the 2015 winners of the “Mongolia’s Got Talent” television show.  U.S. Embassy Deputy Chief of Mission Manuel P. Micaller and Mongolian Ministry of Foreign Affairs (MFA) Public Diplomacy Department Director Kh. Mandakhtsetseg opened the event.  During the concert,Access English Language Microscholarship students performed on stage with Vocal Trash.  Mongol HD TV covered the event and will broadcast it nationwide on June 1 to mark International Children’s Day.  The two musical groups’ collaborative effort was unique, as both used instruments made from recycled and repurposed materials, and both are advocates for protecting the environment and raising awareness of key environmental issues.  The concert also coincided with Ulaanbaatar’s first-ever celebration of Earth Protection Day.

In addition to the concert, Vocal Trash conducted 15 different programs and events, directly interacting with more than 2,500 people and indirectly reaching another 500,000 through traditional and social media.  The envoys’ performances and activities at the American Corner in the Ulaanbaatar Central Public Library on April 28, the Nairamdal Children’s Camp – Sparrow Theater on April 29, the Children’s Creativity Center on May 1, and a MASA-organized happy hour at the Hard Rock Café on May 2 were all open to the public.

On several occasions, Vocal Trash attended or performed at events that honored local civil society organizations’ efforts to raise environmental awareness.  For instance, they performed at the opening of a recycled art exhibit by women entrepreneurs at the Arts Council of Mongolia’s 15th anniversary celebration.  They also made a special appearance at the Zorig Foundation’s Rural Environmental Fellowship Program’s closing event, which brought together fellows from all of Mongolia’s 21 provinces to discuss their activities and increase their capacity to address pressing environmental issues.

In addition, Vocal Trash performed at Sukhbaatar district ger area secondary school #58 for more than 400 students; at an annual talent competition among five special needs schools in the Ulaanbaatar area; and at the National Center against Violence shelter for victims of domestic violence.   The group also performed a half-time show during a basketball tournament at an annual sports competition among Ulaanbaatar area orphanages.  Vocal Trash break dancers Anthony Silva (a dancer with the Houston Rockets professional basketball team) and Pablo Barracuda were a big hit, especially when they were called on to do a break dance battle.

Apart from performing, the band joined a hike and trail clean-up on Bogd Mountain with the U.S. Embassy’s Green Team, Achilles International Mongolia, Access English Language Microscholarship students, and the Young Diplomats Club.  Some 70-80 individuals worked hand-in-hand, united in their desire to protect the environment and give back to the community.

The band’s visit coincided with other special events as well.  On April 28, the band joined U.S. Embassy and MFA representatives at an awards ceremony recognizing the winners of an art contest organized in conjunction with the U.S. Embassy-sponsored “Environment” U.S. and Mongolian children’s art exhibit at the Ulaanbaatar American Corner.

Finally, Vocal Trash enjoyed a unique opportunity to interact with talented Mongolian musicians on International Jazz Day, celebrated every year on April 30.  This year a budding jazz band called “Jazz Train” organized the event at the Children’s Amusement Park.  Vocal Trash shared the stage with various jazz artists, performing renditions of legendary jazz pieces such as Louis Armstrong’s “When the Saints Go Marching In” and their own Broadway-style performance of Benny Goodman’s “Sing Sing Sing.”

It was an honor for the U.S. Embassy to host Vocal Trash.  The Embassy is especially grateful to the band for performing for the Embassy community’s youngest members during the annual “Take Your Child to Work Day” event.  The Embassy would also like to thank the Mongolian MFA, the Ulaanbaatar Central Public Library and American Corner, Mongol HD TV, the Ulaanbaatar Ensemble Theater, MASA, Egshiglent Chimee, and many more who made the visit such a success.  We look forward to continued cooperation in the months and years ahead.

For photos of Vocal Trash in Mongolia:

For more about Vocal Trash:

For other Vocal Trash-related media coverage: